Coral reefs could recover, but action is needed, say experts 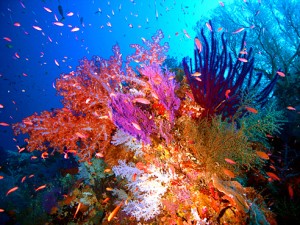 With as many as one billion people relying on coral reefs for their food and their livelihoods, protecting this biologically diverse ecosystem is ecologically, socially and economically important.

“Coral reefs are biologically diverse and highly valued ecosystems that are declining worldwide due to climate change, ocean acidification, over fishing, land based sources of pollution and other anthropogenic threats,” said Wenxi Zhu from UNESCO’s Intergovernmental Oceanography Commission (IOC).

Current predictions estimate that between half a billion and one billion people are dependent on coral reefs for food and their livelihoods. With a growing population, the pressure this places on the coral systems is only going to increase.

“Even if you went with the lower figures and it was half a billion people who depend on reefs, that number could easily double in the next 50 years,” said Dr David Smith, Director of the Coral Reef Research Unit based at the University of Essex.

“At the same time it is predicted that the percentage of coral reefs that are very exploited or very degraded is likely to double. So you have this mismatch of reef quality going down but dependency going up.”

Recent estimates put the cost of losing the world’s coral reefs at close to $400 billion. In some countries, coral reef based tourism can be up to 90% of GDP.

As well as tourism, reefs provide a vital source of food for many costal communities, act as huge sea wall defences and contain a disproportionate amount – 25% – of marine species.

As the science around coral reefs is understood more, marine planning and marine management also increases.

Dr Smith agrees this is important, as understanding the isolation of reef species and external impacts upon them will help scientists understand how to go about implementing recovery. 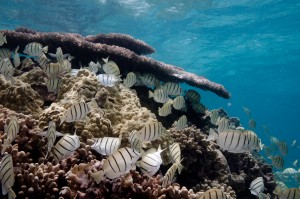 As much as 25% of marine life is found in the coral reefs (source: USFWS Pacific)

“Undoubtedly corals will recover but the recovery might be affected by climate change variables, which we won’t be able to assess before it really bites,” he said.

“If a reef is not completely degraded then fine recovery is possible within a ten or twenty year period. But as soon as it reaches an absolute critical threshold then the recovery is much, much slower.”

The IOC has been working in the Western Pacific, home to 70% of the world’s coral species since 2009 to understand the regional issues affecting the health of the corals, and organising two regional training conferences in Thailand and China.

He warns that protecting areas such as the Great Barrier Reef – an area which is strictly legislated and controlled – will be a much simpler process than protecting a remote reef in Indonesia, where local dependency is high.

“There is no point in going to a local community and saying ‘well if you conserve this for the next ten years you will benefit’ when they are scrabbling for food for the next day,” he said. “It really needs to be locally contextualised.”