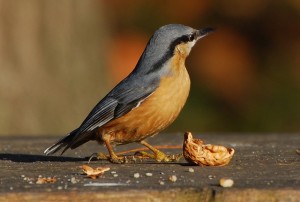 Nuthatches are increasingly seen in northern England and Scotland due to warmer climates (source: mongider/flickr)

Households up and down the country will be settling down for RSPB’s Big Garden Birdwatch this weekend, but what could results tell us about climate change’s impact on UK bird populations?

The aim of the watch is to gauge how the nation’s bird populations are reacting to pollution, habitat changes, shortening food supplies and climate change.

If living in central London, you may be lucky enough to see a parakeet, a species of bird originally from countries such as India and Brazil but which are now surviving in greater numbers in Southern England.

Concerns that the bird is now present in such large numbers to put native species at risk led to calls in 2011 for the species to be culled.

Meanwhile if you are living in Lancashire or in Scotland you might spot species such as avocets, great spotted woodpeckers or nuthatches this weekend, it could point towards migration of the bird to increasingly warmer climates in the north of the country.

A four-year study from the British Trust for Ornithology found these species were now thriving in Lancashire due to change in climate, availability of food and good habitat management.

Louise Smith of RSPB Scotland said: “The results help us paint a clearer picture of bird populations…In the case of the nuthatch it could also help us understand how the species is responding to the impacts of climate change.

“As always we will be keeping a watchful eye on all garden bird numbers so the more results we have, the better chance we have of spotting any worrying trends.”

Meanwhile, the last two winters – both of which have been much colder than average –  have thrown up a few surprises for the RSPB.

“They actually seemed to have fended off the cold weather quite well.”

Their presence in gardens, however, shows how much birds rely on households when the weather is colder. With a milder winter this year, Houghton warns that bird watchers could be disappointed this weekend.

“If we think back to last year it was quite cold with snow and everything so birds were flocking to gardens in their droves,” she said. 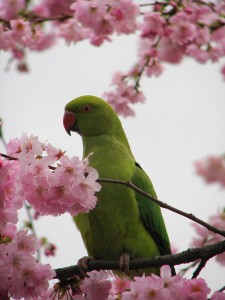 Increasing number of parakeets have been seen in Southern England in recent years (source:garryknight/flickr)

“This year it has been so nice and mild that birds are out in the wider countryside feeding on the berries and even insects that are popping out so we are expecting to see perhaps less birds using gardens.”

With February forecast to be the harshest month this winter, birds could once again be relying household gardens for food and protection from the elements.

Houghton said some simple methods could really help, for example remembering to put water out as well as food.

And households can attract more birds by planting suitable plants in the garden to attract insects.

A report released yesterday by Defra warned that some species would not fare as well under a changing climate as humans do.

To get involved in the Big Garden Birdwatch, visit the RSPB website.