Despite its importance the world’s ‘Blue Heart’ is unprotected and overfished, warns the Blue Marine Foundation.

But with the right policies at least 10% of the ocean could be set aside as marine protection zones over the next decade, compared to the 1.2% currently under protect.

The Blue Marine Foundation was founded in 2010 but the team behind the award winning documentary ‘The End of the Line’ – Charles Clover, George Duffield and Chris Gorell Barnes.

It aims to provide both political pressure and commercial incentives to protecting the world’s oceans.

The film highlighted the plight of the oceans following predictions the world could see the end of most seafood by 2048.

Blue’s biggest success came in 2010 when the UK government announced its intention to turn 210,000 square miles of ocean around the Chagos Archipelago, in the Indian Ocean, into a no-take marine reserve.

210,000 square miles of ocean around the Chagos Archipelago to be turned into no-take marine reserve (source: Drew avery/flickr)

The reserve area is larger than California and doubled the area of ocean under full protection worldwide.

Marina Vaughan, Director of Blue spoke to  RTCC about the ocean’s importance, the crisis they face, over-fishing and marine conservation.

RTCC: Firstly could you tell me a little background about the Blue Marine Foundation and why it was set up?

MV: Our mission is bold but simple: to solve the crisis in our oceans. Despite the importance of the oceans, to all our lives, they have been entirely over looked and we aim to rectify this. We are a young, but experienced, commercially-orientated and ambitious team. Over the next ten years we aim to increase the percentage of protected ocean from the current – pitiful – level of 1.2% to a minim 10%.

That 99% of the world’s oceans are currently unprotected and overfished is a major food security issue. As the planet’s life support system, providing breathable air, life as we know it depends on the protection of the oceans’ intricate and vulnerable ecosystems.

RTCC: What are some of the knock on effects of diminishing fish stocks? Both in terms of the natural implications and the human implications?

MV: Over half of the oxygen produced on earth comes from the oceans and they absorb almost 50% of all the CO2 produced by man. Declining fisheries and destruction of marine habitat are threatening the Earth’s largest and most important natural system, harmful not only to the creatures that inhabit them but also the more than 200 million people reliant on the fishing industry for income and over one billion dependent on fish and shellfish as their major source of protein. The consequences of sustained overfishing will be devastating to communities throughout the world as well as the ecosystems upon which our planet rely. The value of the oceans to the commercial world, from transport to energy, infrastructure and tourism is in its billions while the value of their rich biodiversity is so large as to be nearly unquantifiable.

RTCC: And what is the Blue Marine Foundation doing to try and combat this?

MV: Blue exists to solve the crisis in the oceans by providing private sector solutions to overfishing and enabling a global network of marine reserves.

Too often conservation fails because of insufficient funding and the lack of a holistic approach to biodiversity protection, including poor governance and social demographic factors. We aim to change that. By creating innovative market-based solutions and flexible, public-private partnerships Blue hopes to incentivise stakeholders and facilitate lasting marine conservation.

Blue works on many different levels. We work with governments to construct legislative frameworks that are conducive to conservation; provide financial incentives and support mechanisms to help the transition to sustainable practices; facilitate the work of NGOs and scientists by translating the science and providing measurable benefits for indigenous communities. We also focus on public awareness using social media forums and harnessing the power of inspirational stories through film documentaries. Lastly, we raise critical funds through philanthropic and corporate sources to kick start projects.

A major success is the protection of the Chagos Archipelago. The Chagos is a rare, globally significant ecosystem housing innumerable unique and critically endangered species, including over 220 types of coral and over 1,000 species of fish. For a decade preceding Blue’s involvement the Chagos was earmarked as a potential site for a marine reserve with a number of well known NGOs such as Pew, WWF and the Chagos Conservation Trust working on the project. However they were missing two key components, funding to operate the reserve and UK government backing. 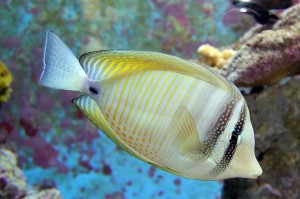 Over a million people have seen the End of the Line to date (source: taras kalapun/flickr)

We found the funding, generously donated by the Bertarelli Foundation and orchestrated the necessary support from the government. On 1st April 2010 the UK Government announced its intention to turn 210,000 square miles (544,000 square kilometers) of ocean around the Chagos Archipelago into a no-take marine reserve. This doubled the area of ocean under full protection (an area larger than California).

RTCC: Why are marine protected areas so important?

MV: In June 2010, 250 leading scientists called for the establishment of a worldwide network of highly protected marine reserves as ‘an essential and long overdue contribution to improving stewardship of the global oceanic environment.’ The reason? Marine reserves work. Marine reserves, whether in temperate or tropical waters have a positive impact on all issues affecting the ocean, from overfishing and plastic waste to acidification, because they promote and enhance the ocean’s resilience and capability to recover. Science shows that in aggregate, exploited fish stocks typically increase by two to three times within two to five years of protection, while some species increase more than ten-fold. In Florida, after only 4 years of a fishing ban, from example, densities of yellowtail snappers were up by 15 times in Sanctuary Protection Zones.

RTCC: What would be the best and worst-case scenario for the oceans looking into the future?

MV: Business as usual in the oceans would literally be devastating to our way of life in the mid to long-term. We believe that the world can and will protect at least 10% of the oceans in the next 10 years, but this ought to be the minimum. For example, Blue, in partnership with the Marine Reserve Coalition are calling for the UK to protect 30% of the seas under its jurisdiction. In the end, the ocean is the ‘blue heart’ of this planet, as the great ocean explorer Dr Sylvia Earle calls it, and she asks how much of your heart would you be willing to protect.

RTCC: We have had a lot of focus placed on the issue of over fishing, including the ‘End of the Line’ and ‘Hugh’s Fish Fight’. Are you seeing higher levels of public engagement?

MV: Absolutely. In 2009 we made the internationally acclaimed film ‘The End of the Line’ to raise awareness of the marine crisis. This film started a movement, with many NGOs, governments, media, restaurants and chefs becoming involved in the quest to save the world’s oceans.

Over a million people have seen EOTL, according to a study by the Channel 4 Britdoc Foundation – for every person who saw the film, 510 knew about it.

Awareness raised by the EOTL and Fish2Fork (our partner organisation that is an online restaurant guide that rates restaurants for quality and the sustainability of their seafood) and amplified by Blue, has influenced supermarkets across the country to change fish sourcing policies and inspired numerous celebrity figures to champion the cause of the oceans looking at issues surrounding discharges, EU fishing policy and consumer power. For example, more than 40% of the restaurants reviewed by F2F have improved their sustainability rating in the last year. Combined with the voice of important ocean campaigners like Hugh Fearnley-Whittingstall, the British public, let alone the international community, is waking up to the plight of the ocean, and moreover, starting to take action.

To find out more about the Blue Marine Foundation visit their website.