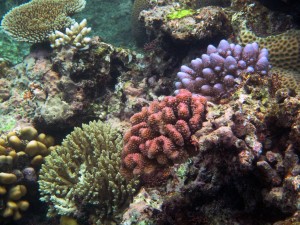 Lynas believes the biggest threat of ocean acidification is to the coral reefs (source: babasteve/flickr)

Ocean acidification is intimately linked to climate change, and the world has only decades before it crosses the ocean’s planetary boundary, according to environmentalist and author Mark Lynas.

In his most recent book, ‘The God Species’ Lynas breaks the problems facing the natural world into the nine planetary boundaries.

He contends crossing these boundaries will result in dangerous environmental changes.

While some scientists believe several boundaries have already been crossed (climate change, biodiversity and nitrogen for example), Lynas believes ocean acidification is both “the one we are approaching most rapidly, and one of the ones that is most difficult to do something about”.

RTCC spoke to Lynas ahead of Oceans’ week to talk about the threats of what is now being named the ‘Evil Twin’ of climate change.

RTCC: Ocean acidification has come to be termed the ‘Evil Twin’ of climate change, does this mean that it is not the most important issue we face?

Mark Lynas (ML): In terms of a climate change and the CO2 problem – the two are intimately intertwined and I don’t think there is anything to be gained from trying to assign rank, with one more pertinent than the other, given that the solutions to both are largely the same, which is to decarbonise the global economy, eliminating the use of fossil fuels and also protecting the world’s forests from being cleared.

I think ocean acidification simply adds more urgency to the challenge of global warming and more reasons why some of the sticky plaster measures like geo-engineering options that are being touted are simply not sufficient.

RTCC: A lot of the focus around acidification has looked at its impacts on coral reefs and fish, what are the sort of timescales we are currently looking at?

ML: I think we are looking at the process of gradual erosion of the ecological baseline of the oceans, in the sense that they will become more and more hostile to helping carbonate shell organisms, which includes various types of marine plankton as well as of course skeleton forming and tropical coral reefs, both of which serve really vital roles in terms of being the host and the basis for much of the marine food chain.

So I think we are looking at a multi-decadal and ultimately multi-century process. This is isn’t something that is going to devastate the oceans next year or even in the next decade. It is a much longer-term challenge than that.

RTCC: And what extremes could we witness across these timescales?

ML: The initial signs of acidification I think are really visible in the Arctic because colder water. CO2 is absorbed more the colder the water gets and whether I think that has any ecological impact at the moment is kind of a moot point. Certainly the alkaline levels of the oceans are dropping and that is being measured and it is a very long-term trend and can be identified across all of the global oceans.

I think it is probably the impact on coral reefs that are probably the most worrying in terms of the eventual likely magnitude, because ocean acidification could mean the virtual extinction of coral reefs, which are of course treasure troves of marine biodiversity and a global natural asset.

RTCC: The effects of ocean acidification are likely to also have a human impact on communities – for example in the Maldives – which rely on the oceans for fishing and tourism. What are the effects likely to be in these regions? 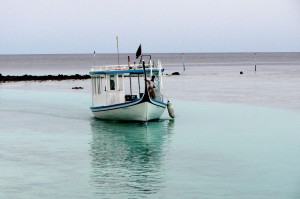 In the Maldives there is a lot of anecdotal evidence of people experiencing changes (source: warrenski/flickr)

ML: The problem is the vast majority of Maldivian reefs, like the vast majority of reefs worldwide are already degraded because of a combination of anthropogenic impacts, which vary from over fishing to nutrient pollution, from sewage and other stuff which goes into the sea, to ocean warming due to climate change which is probably had the biggest impact already in the Maldives.

It has killed 80 to 90% of the reefs over the last fifteen, twenty years so by the time acidification really starts to take its toll there isn’t going to be much left but it would be the real coup-de-grace I think to what’s left of the coral reefs and it also means that some places which are still pristine, like some atolls in the parts of the Pacific, they too will begin to be affected, not just by warming but by acidification as well.

For coral atoll nations like the Maldives which are only viable in the long term as living ecosystems because the reefs are necessary to protect the islands and support the tourism and fishing industries, once those reefs have gone forever those islands will basically erode away at the same time that sea levels are rising and threatening to overwhelm them so this is one of a combination of impacts, all of which are pointing in the wrong direction and getting more and more urgent.

RTCC: It is a topic that is often referred to in scientific circles but not so much in the wider world. Is it a problem that is understood in the Maldives?

ML: If you mean ocean acidification in particular it is really not very high up on anyone’s radar. The fisherman are complaining that there are less and less fish, they are by and large talking about tuna and other pelagic fish so ocean acidification is unlikely to be the culprit.

There are all sorts of anecdotal accounts by local people of things changing and by and large things getting worse but as far as I know there aren’t any studies in the Maldives areas as to what the trend is in terms of acidity, because it does vary in different parts of the oceans. There is a lot of noise in the system as there is with climate and so you don’t expect a monotonous linear trend in one direction.

RTCC: And do you think there are other problems – for example sea-level rises which are seen to be more urgent?

ML: Other than cutting back on CO2 there is nothing really that can be done about ocean acidification. There aren’t many things I can think of in terms of adaptation opportunities.

I suppose what can be done is to protect the resilience of reefs as much as possible by trying to remove some of the other anthropogenic threats so it is another good reason to install proper sewage treatment on the islands for example.

The people need services and facilities and it is another reason to protect the fish that keep reefs healthy, particularly the grazing species of fish, the parrot fish and things like that which are under threat both by local fisherman and resorts. It could add pressure to be sustainable and as to how the coral reefs are managed.

Ultimately this simply adds pressure to do something about carbon as a whole. There isn’t one that has really come through that I have noticed in the international negotiations – I mean ocean acidification is barely ever mentioned.

RTCC: In The God Species you look at some short-term measures that could help combat ocean acidification. What are these and what benefits could they bring?

ML: The proposal was merely that lime or olivine could be added and could restore some of the alkalinity to the oceans and the chemistry of some of these proposals is interesting and worth looking at.

The challenge of course would be scale, for example the Maldives is 100’s of km top to bottom and there is enormous quantities of reefs and also, of course, the ecology of doing this in other terms because these kinds of sticking plaster solutions can have a low impact.

Whilst I totally support research and experimentation I don’t think we can set much store in rather small-scale geo-engineering to try and tackle ocean acidification in particular but also carbon accumulation in the atmosphere on a wider scale.

RTCC: Also in the book you look at the nine planetary boundaries. In a recent New Scientist article they wrote that three of the nine boundaries had already been crossed – biodiversity, climate change and nitrogen – and that oceans’ was one of the next that is likely to be crossed. Is this something you would agree with? 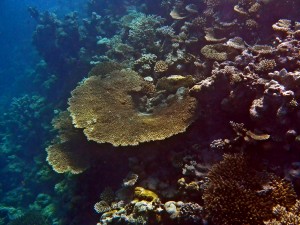 "Coral atoll nations like the Maldives are only viable in the long term as living ecosystems with the reefs to protect them" (source: fleckchen/flickr)

ML: Well the boundary is defined in terms of aragonite saturation ratio in the oceans and I think, I can not remember the exact numbers by hand, but I think we have got two or three decades maybe and no more in terms of where we are going to be or how much time we have left on the relatively safe side of the boundary.

RTCC: With Rio +20 coming up this year, do you think there is a good opportunity to engage people on oceans?

ML: Rio is about sustainability of the broadest possible level so in terms of being able to draw out any single topic for special treatment, it’s difficult.In many ways that is the usefulness of the planetary boundaries approach as it draws out nine specific issues for selected treatment both political and with technology so there are huge numbers of initiatives going forward to Rio, and we in the Maldives have our own initiative in preparation together with other governments looking specifically at advancing the rate of decarbonisation and for countries to go 100% renewable and carbon neutral. But this really has to start to snowball over the next decade or so.

I think we are seeing some signs of it but it has actually if anything slipped down the political agenda over the last two to three years and that is not a positive trend.

Mark Lynas is an  author, environmental activist and climate change specialist. He is also advisor on climate change to the president of the Maldives.

Contact the reporter responsible for this story at [email protected] or @rtcc_tierney.