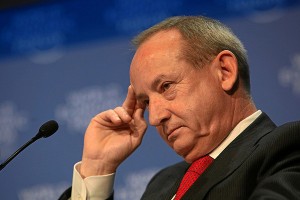 Speaking at the Nordic Council meeting de Boer said public-private partnerships were a good way to ensure that sustainable investments continued to flow.

“The bulk of investment in sectors relevant to climate including energy are private rather than public,” said de Boer, now KPMG’s Special Global Advisor on Climate Change.

“Unless we can get private investments going in the right direction then we are in big trouble.”

De Boer said that while public-private partnerships were helpful, it was essential that a compelling case was made for sustainable economies globally.

“You need a specific sustainable growth story for Norway, Mali, the US. It’s only when politicians, business people and voters see that sustainable growth can be made to work for their country, that they’ll believe it is possible,” said de Boer.

“To some green growth means only investing in green technology. I believe it means growing your economy in a more sustainable direction,” he added.

At the latest round of UN climate change negotiations in Durban, there was opposition to the private sector having too much control of future climate action. Critics claimed this would put profit before people. The issue was central to the brief ‘Occupy‘ protest at the end of the conference.