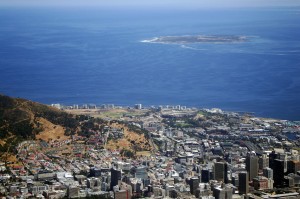 40% of the global population live within 100km of the coast (source: warrenski/flickr)

Coastal erosion is a major problem for Africa.

In northwest Africa, the coasts are economically important since a large part of the gross domestic product (GDP) is derived from coastal activities such as fishing, tourism and commerce.

This is one reason why populations are concentrated along the coastline, with a rate of urbanization slightly higher than the interiors. As a result, many capitals and major towns are coastal.

Along the northwest coast of Africa average rates of coastal retreat are between one and two meters per year.

However, more serious rates of up to hundreds of metres per year have been observed locally, especially when the process has been created by human activities.

Coastal erosion has devastating effects, inducing the loss of infrastructure such as roads.

It also threatens populations, who can no longer live close to the coastline, and the worry is it is expected to increase due to climate change and sea level rise.

This will bring other problems such as salinisation of water and soils, degradation of ecosystems and flooding. Such predictions were reiterated in the fourth Intergovernmental Panel on Climate Change (IPCC) report.

Moreover, recent studies indicate that sea level observations are already higher than the maximum limit of IPCC projections. This means that we can expect more than the one-meter sea level rise projected for 2100, a fact that the rapid melting of the Greenland ice sheet, as well as strong indications that the western part of the Antarctic ice sheet is also melting, strongly support.

Whatever the dispute about the rates and amounts of sea level rise, it is evident that coastal populations and ecosystems will need to adapt to these changes.

For human beings only three options are available to combat coastal erosion: retreat, accommodate or protect.

A very limited number of studies – conducted mainly during preparation of the Initial National Communications from Parties not included in Annex I of the United Nations Framework Convention on Climate Change (UNFCCC) – indicate that the costs of adaptation are likely to be lower than the impacts costs of doing nothing. 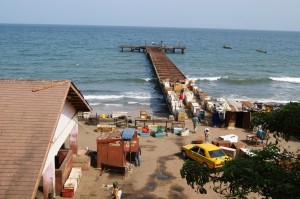 Coastal activities including fishing, tourism and commerce are economically important in Northwest Africa, for example this fishing market in Gambia (source: stringer bel/flickr)

However, the cost of adaptation is already considered to represent between 5 and 10 per cent of the GDP of affected countries, which is a significant sum, especially for the economies of the least developed countries.

This debate is by no means over, since all the elements that could allow a significant cost-benefit analysis are not yet available. A limited number of adaptation options (mainly sea walls) were evaluated but indirect costs (expertise, manpower, technical help) have not been considered. Even the retreat option would have a cost – both economically and socially.

The Intergovernmental Oceanographic Commission of UNESCO is implementing the project Adaptation to Climate Change in Coastal zones of West Africa (ACCC) which is a tentative response to the problem of coastal erosion.

It operates on a sub-regional level and involves five countries: Mauritania, Senegal, Gambia, Guinea Bissau and Cape Verde. National components are developing pilot activities in selected sites – one per country – with the aim of reducing the threat of coastal erosion, while increasing biodiversity and strengthening the adaptive capacities of local communities and ecosystems.

The project also attempts to include climate change considerations in different development plans – for example, tourism strategy and master plans for coastal towns.

One of these pilot projects is taking place in Varela, Guinea Bissau, where extremely rapid coastal erosion is occurring. Activities on the site include cleaning the beach (mostly material left by a former tourist industry infrastructure), mangrove restoration and afforestation.

These activities are conducted with local non-governmental organizations (NGOs) and represent an opportunity to conduct awareness training with different levels of society, including women and the young.

At a national level, agreements have been made with the Ministry of Tourism to include climate change aspects, as well as integrated coastal management, in its strategy development.

The regional component implemented by IOC/UNESCO aims to develop training on a variety of related matters, these include climate change and coastal zone management, techniques for mangrove restoration and littoral dune afforestation.

A shared environment consisting of a website, network and database is being created. This enables exchange of experiences, and supports sub-regional activities to increase the opportunities for decision makers to act, and increase the design and implementation of integrated coastal zone management policies.

A ‘training of trainers’ programme has been organized, through the Sandwatch programme, which is supported by UNESCO in the Caribbean and Pacific islands regions, and seeks to teach scholars how to monitor beaches effectively 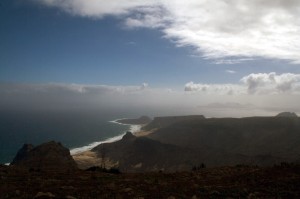 Along the Northwest coast of Africa average rates of retreat are between one and two metres per year (source: dickdotcom/flickr)

The ACCC project is one of the various sub-regional efforts to adapt to climate change in costal zones.

These include the West African Economic and Monetary Union, with its project on coastal erosion; the International Development Research Centre, with its programme on Adaptation to Climate Change in Africa; and Le Programme régional de Conservation de la zone Côtière et Marine en Afrique de l’Ouest, which is a consortium of NGOs focused on protecting the marine and coastal areas of West Africa.

The point of this ACCC project is to promote multiple adaptation responses to combat coastal erosion, since no single option can fit all circumstances.

The inclusion of stakeholders through sensitization campaigns and activity-integration is an important aspect of this project. By involving stakeholders the project benefits from a wide variety of experiences, as well as becoming a larger network.

The actions taken during this project are also expected to promote the development of biodiversity, since improving the marine environment improves the well-being of the wildlife that depends on it – including turtles and marine birds.

Isabelle Niang is regional coordinator of ACCC project at the UNESCO BREDA Office.