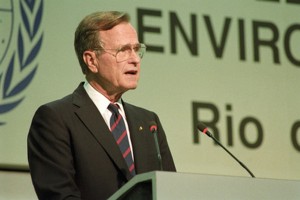 George Bush Sr, then President of the US, adresses the Rio Earth Summit in 1992 (Source: UN/Michos Tzovaras)

The Rio+20 summit will focus on sustainable development as a framework for progress rather than climate change, which has been deemed as too divisive.

“Climate change has very strong resistance from sectors that are going to be substantially altered, like the oil industry,” said Correa do Lago. “Sustainable development is something that is as simple as looking at how we would like to be in 10 or 20 years.”

Do Lago highlighted the resistance to the Kyoto Protocol, designed to reduce international greenhouse gas emissions and the absence of climate change on the US political agenda as further examples of the controversy surrounding climate change.

The Rio+20 event will mark the twentieth anniversary of the 1992 Earth Summit.

A draft outcome document obtained by The Guardian, suggests the summit will look to agree a new deal on ocean protection as well as increased action on food security, green job creation and the establishment of a ‘Sustainable Energy for All’ programme.