The ocean is a vast, dynamic and complex environment, providing a whole host of benefits to humankind. 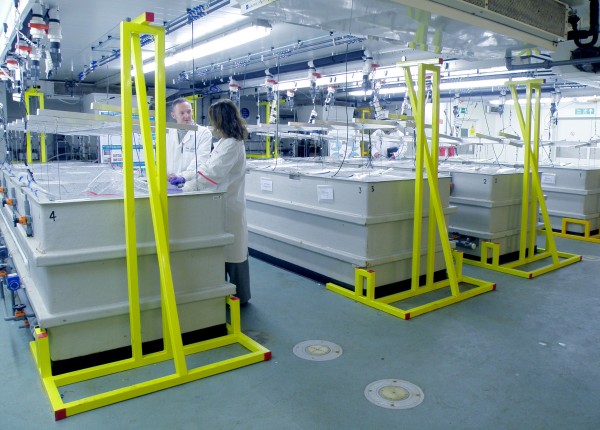 Plymouth's seabed simulator, full tidal system – the “seabed” is lifted out of the water, consistent with the natural tides of Plymouth

When thinking about the ocean most will consider marine services such as food provision, leisure and recreation, transport and a source of raw materials.

But the ocean also provides us with ‘hidden’ benefits, for instance, climate regulation, coastal defences, removal of waste, cultural heritage, nutrient cycling, renewable energy and is a potential source of new and exciting opportunities for industry.

But as much as we might rely upon it, this wonderful environment faces many challenges brought about by human activities, such as climate change and over exploitation, which are changing the way our ocean and the organisms within function.

One recently recognised challenge is ocean acidification; a term used to describe the ongoing decrease of ocean pH caused by human CO2 emissions, such as the burning of fossil fuels, deforestation and cement production.

Now for the science…

Atmospheric CO2 dissolves in the surface waters of the ocean and rapidly goes through a series of chemical reactions; the combination of CO2 and seawater forms a weak carbonic acid (CO2 + H2O = H2CO3) and has so far caused a 0.1 unit drop in surface pH, representing a 30% increase towards acidity. 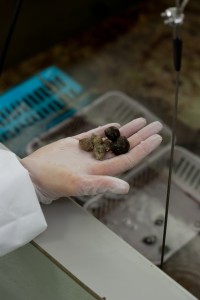 This reduction in pH has a knock-on effect of reducing the availability of carbonate ions, needed by organisms that build shells or exoskeletons out of calcium carbonate, such as oysters, mussels and snails.

There is also evidence to suggest that internal functions, for example reproduction and digestion, of some marine organisms will be affected and that other organisms are particularly vulnerable during key life-stages, such as eggs and larvae that have shown severe tissue damage and stunted development, when exposed to lower pH.

Research into this phenomenon suggests that pH may fall by a further 0.3 – 0.4 units by the end of the century.

This is not to say the ocean will become acid but rather it is becoming less alkaline, which has as yet unknown implications for marine organisms, processes, the ocean and humankind.

Whilst there is evidence that indicates that some organisms might actually benefit in the short term from such chemical changes to the marine environment, little is known about the longer term effects on the wider habitats and the communities they contain; the detail may not be understood yet, but there is little doubt that fundamental changes to ocean chemistry are likely to have profound effects.

It is these unknowns that add to concerns for the future of the global ocean and drive much of the investigations into the subject.

Ocean acidification research is still in its infancy; the first reference to the issue appeared in the scientific journal Nature in 2003 (Caldeira and Wickett) and since then has been steadily gaining momentum, not only within the scientific community but also on social and political agendas. 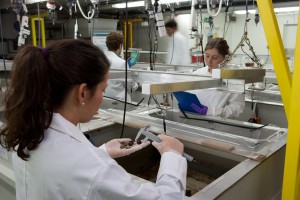 Each with a different but complementary remit, these programmes have been investigating the issue extensively; from the impacts upon individual species/marine processes and socio-economic evaluations to comparisons with historic acidification events and the implications on future CO2 absorption by the ocean.

Speaking at this year’s United Nations Framework Convention on Climate Change 17th Conference of the Parties (COP17), Dr Carol Turley, Senior Scientist at Plymouth Marine Laboratory and Knowledge Exchange Co-ordinator for UKOA, commented: “Often forgotten in such discussions are the ocean and the enormous and diverse resources it provides, including food and other resources even half the oxygen we breathe.

“The health of the ocean is therefore relevant to everyone one of us on Planet Earth and we are concerned about how stressors, including ocean acidification, produce a very worrying combination which threatens the ocean and everything it provides us.

“We have produced a short ‘Ocean Stress Guide’ that sums this up in clear language; we would urge everyone to read it.”

Kelly-Marie Davidson is communications officer at the Plymouth Marine Laboratory.