Expert Q&A: How the Southern Ocean helps us plan for climate change 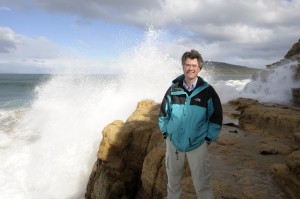 The Southern Ocean is vital to understanding possible future response of the globe to climate change, say scientists from the Antarctic Climate and Ecosystems Cooperative Research Centre (ACE CRC) based in Hobart, Australia.

While discussions on climate change and ocean often centres on the averages – average acidity, average sea-level rise – the effects of climate change can vary quite significantly from ocean to ocean.

The Southern Ocean is of vital importance to scientists. Many effects of climate change will be seen in the Southern Ocean and the Antarctic long before they are seen elsewhere, and those effects could have profound impacts both on regional and global climate.

Nathan Bindoff is an oceanographer, coordinating lead author for the Intergovernmental Panel on Climate Change’s 5th report and project leader within the oceans programme at ACE CRC.

RTCC caught up with him to talk about acidification, sea level rise and melting ice in the Southern Ocean and what this could tell us about the rest of the world.

It’s a very basic chemistry so it is carbonic acid plus water plus CO2 that increases the acidity. So it is pushing the ocean into a more acidic state.

RTCC: And to what extent is this process being witnessed?

NB: Wherever we have made measurements of ocean acidity, it is rising and the atmosphere has only increased from 280ppm to 350-370ppm, so a 25% increase, and yet we’ve already seen the ocean acidity increase by 0.1 pH unit, which is a 20-30% increase in the acidity of the ocean itself. So this is not trivial.

RTCC: As well as taking up carbon dioxide the oceans are also storing a lot of heat, what impact does this have?

NB: If we just go back to the service of the oceans in terms of storing of the carbon dioxide. It turns out that we can estimate the fraction stored of the total emissions that have been made by man and other activities.

Basically the oceans take up something between 35 and 42% of everything that has been emitted into the atmosphere.

So the oceans are providing a key service, because if the oceans were to stop taking up the carbon dioxide the atmospheric composition would continue to change at a faster rate than observed.

So the oceans are providing a service if you like to mankind by actually actively storing the carbon dioxide in the ocean itself.

This is the storage of the heat, and the oceans are playing quite a big role in storing the excess heat.

They store about 90% of all the excess energy that is being caused by rising greenhouse gases. So the oceans play a rather important role in the overall heat budget or the energy budget of the earth.

The southern ocean is an important part in that because it is one of the oceans where you have what they call a deep overturning circulation and so there is a very strong uptake of heat in the southern ocean.

The consequence of this is that it makes it harder for the oceans to take up carbon dioxide as efficiently as it has done in the past.

This means is that the capacity of the ocean to take up the carbon dioxide will reduce into the future.

If you look into models of the earths system – oceans and atmosphere together – they all project that the efficiency of the carbon uptake by the oceans will decline as we go into the future. So the fraction, which sits at roughly a third of atmospheric emissions, will go down.

That’s a concern because it means as we continue to emit carbon dioxide into the atmosphere those emissions will tend to be held more strongly in the atmosphere or in other sinks of carbon but the oceans will play a lesser role.

It is a feedback into the climate system where increasing the strength of warming into the surface waters leads to an increased acceleration in the rate of carbon being retained in the atmosphere.

RTCC: And what impact are warming oceans and a warming atmosphere having in the Southern Ocean? 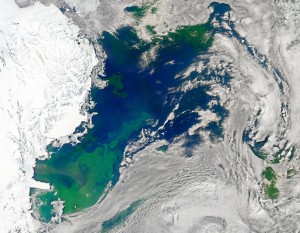 Ariel view of Antarctica and the Ross Sea, Bindoff says the extent to which Antactic ice shelves are metling is concerning. (Source: Nasa Goddard)

NB: The oceans are certainly getting warmer. The areas that are warming up the fastest in long terms trends are the Northern Atlantic and the Southern Ocean.

And the way the Southern Ocean is warming up is that the surface isn’t warming up as fast as the rest of the ocean and terrestrial surfaces but it is actually warming up in the ocean interior quite fast.

A consequence of that is actually the ocean surface is tending to rise a little bit faster in the southern ocean than elsewhere.

In terms of sea ice the artic – the northern hemisphere’s counter part of the southern ocean –has seen a very dramatic decline in the amount and areas of sea ice coverage in the artic.

But the story for the southern ocean is actually a little bit different, what’s happened there is a very weak tendency for the amount of sea ice to actually increase around Antarctica, so this is a sort of paradoxical response.

The expected response from increasing greenhouse gases over a long timescale is for the Antarctic sea ice to actually decrease in extent. And what we have seen is a slight increase in extent.

In the scientific literature there is quite a lot of discussion as to why the Antarctic sea ice is increasing in extent whereas the arctic has declined incredibly rapidly. And there is no agreements in the scientific community except to say the increase in the Antarctic sea ice extent is actually very weak and is within our understanding of the natural variations that occur anyway.

The conclusion is that this increase could well just be the natural internal variability within the climate system.

What it means though is that in terms of deciding whether there is an impact on warming of the atmosphere in the Antarctic sea ice extent is something that we will have to wait and see what the answer is.

I expect that it will actually start to decline in the future but it is not immediately present now.

The sea ice is floating and in Antarctica it is formed each winter and melts each summer and the extent of the sea ice varies enormously from month to month and winter to summer. But because it is the freezing of the surface of the ocean, its melt in summer and it’s freezing in winter doesn’t actually change sea levels.

But the important role that sea ice plays is that it changes the colour of the oceans so where they rapidly decline in the artic for instance, the darker ocean has been revealed beneath and that means that the ocean can absorb more heat from the direct sunlight. So the presence or absence of sea ice is very important to how you accelerate the rate of warming in the oceans.

In the projections of the future climate the southern ocean would warm at an even faster rate with the expected decline of the Antarctic sea ice distribution.

RTCC: As well as sea-ice in the Southern Ocean, there is the threat of melting ice from glaciers, what are the trends you are witnessing?

NB: In the case of the ice sheets that are frozen on the Antarctic continent – this is ice that has fallen as snow and then got compacted and it has built this enormous ice sheet over the Antarctica landmass – when that melts it does cause an increase in sea level.

So it this ice, that is on the Antarctic continent, that is being eroded and it is the melt of that ice which is above sea level which when melted contributes to the sea level and sea level goes up.

And one of the things is, that despite the Antarctic sea ice area not having changed, what we have observed and what we can tell from the Antarctic ice sheet is that there is a melt of the ice sheet itself.

And the understanding of that is that the warmer ocean waters are able to travel underneath the sea ice and intrude into the cavities which sit underneath the ice shelves and because the water is slightly warmer it actually accelerates the melt of the ice shelves and this grounded Antarctic ice sheet and the acceleration of the melt particularly in west Antarctica has contributed to sea level and is turning out that Antarctica – the melt of the Antarctic ice sheet is now a significant continuator to sea level.

Since the 1990s we have had a change of the scientific understanding of how the Antarctic ice sheet interacts with the global oceans and the Southern Ocean.

In the last seven years we have some to understand much more clearly that the warming of the oceans and the Southern Ocean in particular provides a mechanism for melting the Antarctic ice sheet not from above but from below by the warmer ocean waters. We are already seeing some of that happen from our studies of the Antarctic ice sheet itself.

So we are kind of starting to see evidence of how the melt is actually affecting the Antarctic ice sheet and also the salinity of the surrounding waters.

NB: The southern ocean is in some ways unique from other oceans so what is really important here is that we understand the differences of the Southern Ocean from the North Atlantic or the North Pacific or the Equatorial Ocean and the real difference of the Southern Ocean is that it has got these deep penetrating currents which go from the surface all the way to the bottom.

So that is a key difference. What that really means is that these ocean currents which store the carbon are different from those in the northern hemisphere and the mid latitudes.

Understanding how the southern ocean really works and how it absorbs these gases, how it absorbs the excess heat, how it holds the surface temperature of the Southern Ocean and the southern hemisphere to a lower temperatures change than the northern hemisphere are really key things to understanding how future climate will evolve.