EU emissions scheme could lead to rise in C02 levels

Europe’s flagship Emissions Trading Scheme (EU-ETS) is being undermined by a permits surplus, according to the Climate Markets and Investment Association (CMIA).

The body warns that unless direct action is taken to close this loophole, the main objective of the EU-ETS to reduce carbon emissions will be fatally undermined.

The economic crisis of 2008-2009 saw emissions covered in the ETS fall well below their caps – but the scheme allows companies to keep credits below the caps for three years.

“We anticipate this surplus to allow companies covered by the scheme to overshoot their cap over 2013-2020 by a very large margin,” the CMIA says.

“If used gradually over the period, the surplus [Phase II] emission permits and CER use allowance may allow emissions to rise by 13% compared to Phase II, and by 2% compared to 2005.”

The EU currently aims to cut 20% of emissions by 2020, although there is pressure to increase this target to 30%. 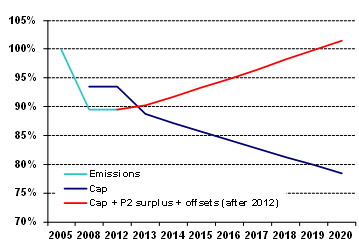 The CMIA argue that European companies will find this even harder to achieve if the EU-ETS is not reformed, since many companies now have so many carbon credits they can increase their emissions without facing any penalties.

They propose that: “if a certain number of surplus credits have not been used after three years, an equal number should be reduced from later supply”.

January 2012 has been a particularly uncomfortable month for the EU’s trading scheme.

The imposition of penalties on airlines flying in and out of EU airspace has been criticised by the USA, India, Russia and China.

Scott McGregor, CEO of Camco told RTCC: “The EU is well aware that the mechanisms of demand and supply within the EU ETS need to be tightened to encourage emission reductions and recent committee decisions show that they are working to address this issue.

“We have full confidence that the EU will implement the necessary policies.”

Emissions trading is seen as one of the cornerstones of a market-based climate policy, and is a key tool in the Kyoto Protocol.

The 27 EU member states plus Iceland, Liechtenstein and Norway take part in the scheme, which covers power stations, heavy industry, and from 2012, airline emissions.