What can the oceans do for us? 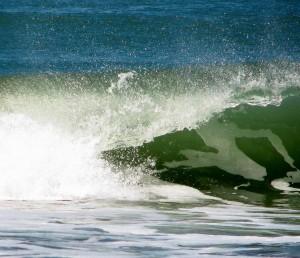 UK marine energy has the potential to generate the same amount of energy as 8 coal-fired power stations (Source: lrargerich/flickr)

Britain’s first Marine Energy Park is to be developed in the South West of the country, in a bid to speed up the development of marine technology.

While much focus has been placed on protecting the oceans against the effects of climate change, there is also a huge opportunity to harness their power and exploit it for energy generation.

Wave power has traditionally been overshadowed by the likes of wind and solar energy – which are easier to develop.

According to the Department for Energy and Climate Change, however, energy from the waves and tides has the potential to generate up to 27GW of power in the UK alone by 2050.

Speaking at the launch of the Park, Minister for Energy Greg Barker left onlookers in no doubt as to the government’s enthusiasm for exploiting the sea’s potential.

“Marine power has huge potential in the UK not just in contributing to a greener electricity supply and cutting emissions, but in supporting thousands of jobs in a sector worth a possible £15bn to the economy to 2050,” he said.

“The UK is already a world leader in wave and tidal power, so we should capitalise on this leadership to make marine power a real contender in the future energy market.”

The new Marine Energy Park will stretch from Bristol through to Cornwall and as far as the Scilly Isles.

The first commercial wave farms of 10 to 30 mega watts (MW) will be located off the north Cornish coast – an area popular with surfers because of the huge waves that head for its shores from the Atlantic.

Larger farms of 100 MW or more could be situated in deeper water, while government predicts the Isles of Scilly have the potential to be self-sufficient for energy.

Green groups have welcomed these proposals – notably Friends of the Earth (FoE), who recently took the British government to court for slashing solar subsidies.

But using waves to generate energy is not a recent discovery.

The first wave-power patent in history was awarded in 1799 for a proposal by a Parisian named Monsieur Girard.

The patent was to use direct mechanical action to drive pumps, saws, mills or other heavy machinery.

Marine energy entrepreneurs soon disappeared as fossil fuels emerged and provided a rapidly industrialising world with virtually all of its energy for the next 200 years.

It was not until the 1970s, when the oil crisis hit the West, that focus was once again renewed in technology which used the motion of the waves to generate energy. 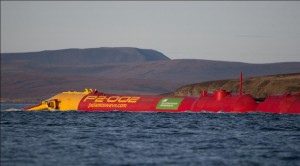 The Pelamis Wave Energy Converter has been trialled off Portugal and Orkney (Source: Pelamis)

And yet progress has been slow, mainly because of the brutal environment in which marine technology has to operate.

Huge waves, viscious currents and the corrosive nature of salt have put pay to many an inventor’s dream.

Existing technologies have often been plagued by unforseen technical and financial difficulties.

In the USA marine turbine company Verdant had to redesign their sub-sea generators after the sea snapped their fiberglass rotors.

Pelamis’s “wave snake” struggled to stay afloat in Portugal, when the financial crisis hit its majority owner Babcock & Brown in 2009.

On top of this technical difficulties meant the £7 million technology had to be pulled ashore for repairs – but the company rode those early waves to improve and develop the product.

The Edinburgh-based firm have completed successful trials with EON in Orkney and are currently looking for investment in order to expand their commerical operation. Potential investors include BAE Systems, Rolls-Royce, Siemens.

The “wave snake” design is also one of the designs expected to be seen at the Cornwall Wave Hub – part of the new Marine Energy Park.

Meanwhile, 2012 has been hyped as the year for ocean power.

Deployed in 2008, the company says the installation costs are £3m for every megawatt they eventually generate, which is still £0.7m more than offshore wind.

Now one new technology aims to make the harnessing of this power both more reliable and cheaper.

The new technology, Searaser, differs from conventional wave technologies as rather than generating energy out at sea – which can be a particularly hostile environment, it uses the motion of the ocean to pump seawater through an onshore generator.

Ecotricty are developing the technology with British Engineer Alvin Smith.

The Company’s founder Dale Vince said: “Our vision is for Britain’s electricity needs to be met entirely from the big three renewable energy sources – the Wind, the Sun and the Sea.

“Until now, the Sea has been the least viable of those three energy sources and we believe that Searaser will change all of that.

“We believe Searaser has the potential to produce electricity at a lower cost than any other type energy, not just other forms of renewable energy but all ‘conventional’ forms of energy too.”

Vince said they will have a commercial scale Searaser in the sea within 12 months and 200 Searaser units around the British coastline within five years.

ECOTRICITY VIDEO: This video from Ecotricity shows how the new Searaser technology will work: