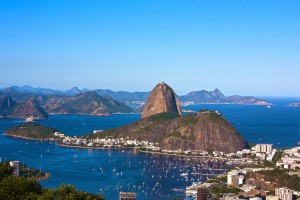 The head of the Intergovernmental Oceanographic Commission at UNESCO has told RTCC that acidification of the world’s seas must be on the agenda at the Rio+20 summit.

Since the industrial revolution, there has been an average 0.1 decrease on average in the oceans pH. That is the equivalent of a 30% increase in ocean acidity.

Under business as usual scenarios, the oceans could see a 100% to 150% higher acidity on average, by the end of the century.

“Because of its potential impacts on the marine food chain, biodiversity, food security and livelihoods of coastal community, we believe Ocean Acidification needs to be recognised as a critical ocean issue and acted upon by the international community in the context of the Rio+20 Conference discussions on sustainable development.”

A more acidic ocean will cause calcium carbonate – the stuff marine plants and animals use to make their shells and skeletons – to dissolve.

It is also the basis for much of the ocean’s phytoplankton – which although small, plays a vital role in the marine food webs, and will have knock on impact of much larger fish and mammals of the ocean.

“The global decrease of coastal marine resources and decline in marine biodiversity will impact countries dependent on coastal fishing, fish-processing industries and tourism causing economic hardship as well as destabilising food security for the 1 billion people who depend on fisheries for most of their protein diet,” Watson-Wright said.

“Regrettably these problems are not yet well recognised outside the oceanographic research community,” she added.

The UNESCO IOC, along with other UN organisations, has tabled a proposal to implement a number of actions to both mitigate and adapt to ocean acidification to be discussed by UN delegates at the Rio +20 conference to be held in June.

A draft agenda for Rio was recently published in the Guardian – it proposed the implementation of “an international observing network for oceanacidification and to work collectively to prevent further ocean acidification.”

Watson-Wright added there were reasons be feel positive that oceans will feature highly in Rio.

“As we are entering the negotiation phase of the declaration that will be adopted at Rio+20, there are encouraging signals that ocean acidification will be considered. In the zero –draft declaration released on 10 January by the UN, the proposals put forward in the Blueprint Report have been included,” she said.

Should oceans be on the Rip+20 agenda? Let me know on: [email protected] or @rtcc_tierney.

VIDEO: Wendy Watson-Wright joined RTCC in Durban to talk about the importance of getting ocean acidification into mainstream climate change discussions.