“Water is much more important than oil” 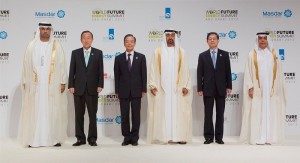 The door has closed on this year’s World Future Energy Summit (WFES).

Attendees included top names from the business, political and academic world aiming advance the energy, energy efficiency and clean technologies of the future.

But what did we learn, and has this summit given the clean-tech world hope for the weeks and months ahead?

Sustainable Energy is Possible and must happen

UN Secretary-General Ban Ki-moon used his keynote address to call on governments and the private sector to make greater commitment towards the UN’s Sustainable Energy for All Initiative.

“Widespread energy poverty still condemns millions to darkness, to ill health, to missed opportunities for education,” he said. “It is not acceptable that three billion people have to rely on wood, waste and charcoal for their energy needs.”

“This is the right time for this initiative…Achieving sustainable energy for all is both feasible and necessary.”

Dr Sultan Ahmed Al Jaber, CEO of Masdar said huge advancements have already been made in the renewables sector in recent years.

Innovation and Education will be essential 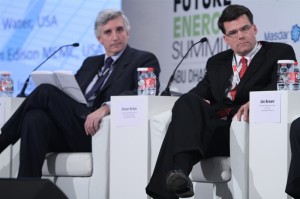 Leading member of the business community met to talk about innovation and education (Source: WFES)

Businesses attending the summit warned that investment in innovation and education will be essential in the future development in renewables in 2012, which they say is set to be a difficult year.

Steve Bolze, Senior VP of General Electric Power and Wind said that those companies who invest significantly in R&D and innovation will thrive.

“Given times, technology investment has to be the long-term differentiator in the sector,” he said.

Tulsi Tanti, Chairman and Managing Director of Suzlon, India said costs of wind power are now on a par with gas and would catch up with coal by 2015. He warned that education was not keeping up with the industry.

“Talent is simply not sufficient to support growth in the industry, so we need to make significant investments to boost that talent pool.”

We are running out of time to act

In his speech Dr Rajendra Pachauri, chair of the Intergovernmental Panel on Climate Change warned that while the world has the capabilities to act against climate change, it’s running out of time to do so.

“We have the capacity, we have the opportunity and we have the technologies,” he told delegates. “We certainly have no limits to the potential that exists for the use of renewable energy.”

He also said the Gulf sits on a gold-mine of untapped solar energy.

Could we still be doomed?

Chief Economist of the International Energy Agency, Fatih Birol was less upbeat about the future. Reiterating the warning of the IEA last year that the world is running out of time to prevent leaving itself on a pathway to a 6°C temperature rise between 2010 and 2035 he said he regretted that the financial crisis had diverted attention from the issue of climate change.

He again slammed fossil fuel subsidies – with global subsidies amounting $409 billion in 2010 – for being an obstacle to the development of renewables.

“To say we want renewables, but then on the other hand give fossil fuels subsidies doesn’t work,” he said. “It’s like you go for a run and then have a big lunch of junk food.”

He also warned that emissions would rise as countries turning their backs on nuclear technologies in the wake of the Fukushima disaster.

Water more important than oil to the Middle East

This year’s summit also saw the launch of International Water Summit which will run alongside next year’s WFES.

Launching the event, Dr Rashid Ahmad Bin Fahd, United Arab Emirates Minister of Environment and Water said the new initiative was a response to the growing importance the UAE government gives to water.

“Sheikh Mohammad [Crown Prince of Abu Dhabi] underlined in a lecture last month that water is much more important than oil for the UAE and its people,” he said.

LEDs and Solar lead the way

The Summit also provides businesses a chance to show off their latest technologies, with many products being launched throughout the four days.

Varous technologies were showcased, including the iMaps application that enables interactive browsing of solar radiation and temperature maps, and the Real Smart Grid which aims at integrating renewable technologies into smart grid systems.