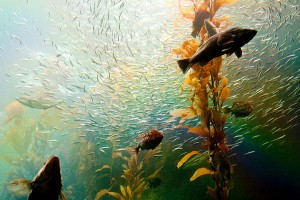 Giant Kelp has been identified as a potential source for biofuels (Source: flickr/eviltomthai)

Researchers have found a way to produce ethanol from seaweed creating a new path for biofuels that does not encroach on resources for food production.

The project by the Bio Architecture Lab in Berkeley California engineered a specific strain of bacteria that digests brown seaweed to produce ethanol.

“Seaweed is already produced in huge quantities around the world without taking up any fresh water or arable land,” said Yasuo Yoshikuni, one of the scientists on the Berkeley team.

Brown seaweed is abundant and some varieties, such as giant kelp, can grow by as much as one metre a day.

Biofuels are produced from a number of different crops at present however, some produce negligible amounts of energy compared to what is required to cultivate and harvest them.

Using sugar cane or corn also uses up valuable arable land and displaces crops that could be used for food.

There is much research looking at the alternative sources for biofuels including jatropha and algae.

It is harder to unlock the energy from these alternatives and it is this challenge that bioengineers are targeting.

A separate team of researchers from Pusan National University in Korea is developing a two-pronged plan to use algae and seaweed as both a carbon sink and a source for biofuels.

VIDEO: Ik Kyo Chang, Professor from Pusan National University, told RTCC at the UN climate change talks in Durban, that as much as 10 tons of CO2 can be sequestered per hectare per year using their seaweed farming method.