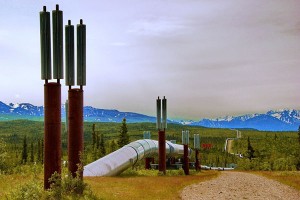 Keystone XL will not add to the many miles of pipeline already running through the US (Source: flickr/DaveSusiBezaire)

The company behind the Keystone XL oil pipeline will submit plans for a new route following the rejection of its original application yesterday.

As reported on the RTCC Climate Curate last night, President Obama rejected the controversial pipeline between Canada and the US.

TransCanada has said it anticipated the decision and will proceed with a new route.

The verdict on the original route was expected in 2013 to allow further assessment but Republicans forced the decision to be made sooner.

“This announcement is not a judgment on the merits of the pipeline,” said the President, “but the arbitrary nature of a deadline that prevented the State Department from gathering the information necessary to approve the project and protect the American people.

“I’m disappointed that Republicans in Congress forced this decision, but it does not change my Administration’s commitment to American-made energy that creates jobs and reduces our dependence on oil,” he added.

The project would transport oil derived from the Canadian tar sands from Alberta to refineries on the US Gulf coast, 2700km away.

The route passed over one of the largest water aquifers in America raising concerns among environmental groups over the effect of any leak on the nation’s water supply.

NASA climate scientist James Hansen has said that exploiting oil from the tar sands will result in CO2 levels reaching critical levels, calling it “game-over for the climate”.

Supporters of the project, including labour unions, said it would create thousands of new jobs.

“President Obama is destroying tens of thousands of American jobs and shipping American energy security to the Chinese. There’s really just no other way to put it,” said John Boehner, the Republican House Speaker.

Obama delayed a decision till 2013 in order to conduct further environmental impact assessments. Critics accused him of avoiding in the issue during an election year.

The EU is currently working on legislation that would classify oil from tar sands in a “dirtier” bracket and create an obstacle to imports of the fuel in the process. The UK and Netherlands are opposed to the changes.

Canada hopes Keystone XL will open up a North American market for tar sands fuel as it does not currently have the port facilities to ship it overseas.