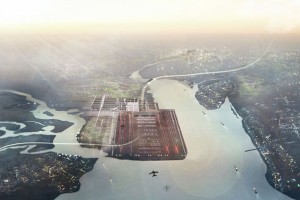 The Thames Hub project would cost an estimated £50 billion (Source: Foster and Partners)

The £50bn plan to build a new transport hub in the Thames estuary moved a step closer today with the project set to be included in the formal aviation consultation process this spring.

The project, commonly referred to as “Boris Island” after its vocal supporter, London Mayor Boris Johnson, was announced in November last year.

It would include a new international airport, freight rail links between ports and major cities and a new tunnel under the River Thames that would also incorporate tidal power generation.

UK Transport Secretary Justine Greening is set to publish the government’s aviation strategy later this year and speculation is growing that the new Thames hub is preferred to the expansion of existing airports.

The government has already said it will not add an additional runway at Heathrow, the country’s largest existing airport.

“If we are to establish a modern transport and energy infrastructure in Britain for this century and beyond, we need to recapture the foresight and political courage of our 19th century forebears and draw on our traditions of engineering, design and landscape,” said Lord Foster, the architect behind the proposals during the launch of the plans.

The Thames hub project has been criticised by green groups concerned both with local impacts and its role in the Government’s wider climate change strategy.

“Any development of this type, on this scale in the Thames Estuary would be an irreversible act of vandalism on a grand scale,” said Chris Corrigan, RSPB director for South East England. “We should be investing in our environment and tackling climate change, building foundations which future generations will thank us for.”