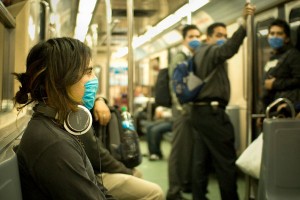 Major flu pandemics could be linked to a climate variation, according to a new study.

Research released this week found that a La Nina event, which creates cooler temperatures in the Pacific Ocean and generally, cooler global air temperatures, has preceded the last four major flu pandemics in 1918, 1957, 1968 and 2009.

The La Nina events occur every two to seven years. One is currently underway.

The findings published in the in the Proceedings of National Academy of Sciences suggest that the effect of La Nina on bird migration patterns could contribute to flu outbreaks.

“Migratory birds, with their long travel distances and many stopovers, are thought to be particularly critical for the mixing and reassortment of [the] inﬂuenza virus,” according to the report.

Birds provide the largest pool from which strains of the human flu are derived.

One of the study’s lead authors, Jeffrey Shaman, an environmental health scientist at the Mailman School of Public Health at Columbia University stressed that the theory is yet to be proved.

Speaking to The Huffington Post he said that if the link could be shown to be more than coincidence, it could provide some time to prepare before a pandemic emerges.

“It could allow us to intensify our vigilance and put more resources in place,” said Shaman.

More work has been proposed to test the theory.