Virtual reality trees installed in major cities could be a vital new tool for climate campaigners in the smart phone era, according to former US Vice President Al Gore.

Speaking at a PSFK event, Gore praised the developers of the REALiTREE, a huge projection which reflects the climate health of its surrounding community.

“The internet and digital technologies are gaining momentum. Individuals now have easy access – there are no barriers to access….and ideas matter,” he said.

The REALiTREE is the idea of Daniel Stark, founder of New York based Stark Design, who describes them as a “giant Tamagotchi which thousands of people care for”.

Tamagotchi is a hugely successful Japanese video game, allowing players to care for a small pet, whose life depends on constant care and affection. 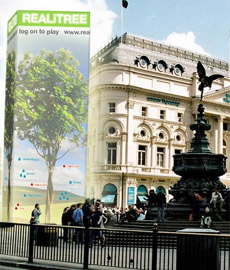 The virtual reality trees could be installed in iconic venues such as Times Square in New York and Piccadilly Circus in London.

“Thousands of people can play to keep this tree alive and well – even though it’s in constant peril,” Stark said.

“The idea is that it reflects climate reality through a series of data feeds coming in from the surrounding areas.”

There have been many attempts to bridge the gaming and environment gap over the years.

But not everyone is convinced.

Speaking to RTCC, games expert and editor of RockPaperShotgun.com Alec Meer cast doubt on the potential for games focused on climate change issues.

“Educational games have traditionally existed more or less separately to entertainment-only games, and that’s going to be tricky bridge for anyone to cross, even Al Gore,” Meer said.

“As in so many other mediums, the second someone’s aware they’re playing something educational, the thrill factor can dissipate.

FACEBOOK DEBATE: Are games an effective tool against climate change?

VIDEO: Al Gore at the PSFK launch of Gaming for Good.

Gaming For Good from Piers Fawkes on Vimeo.