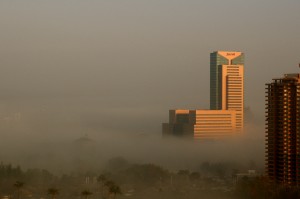 Limiting soot and methane could not only slow global warming but improve health and agriculture (Source: Viernest/flickr)

Simple measures to cut emissions of methane and soot could slow global warming, boost crop production and save lives, according to a new study.

The group of international scientists led by NASA and Columbia University found that putting immediate focus on these two non-CO2 pollutants could reduce projected mean warming by 0.5°C by 2050.

They also found that the measures could boost annual crop yield by 30 to 135 million metric tonnes and help avoid 0.7 to 4.7 million premature deaths annually from air pollution.

The study, published in Science, analysed 400 actions that could be taken by policymakers – focusing on the 14 that would yield the greatest climate benefits.

While most methods to combat climate change currently deal with the ‘headline’ greenhouse gas – carbon dioxide – which is the primary driver of global warming over the long term, these are often expensive, difficult and slow to implement

Shindell believes limiting black carbon (soot) and methane alongside actions on CO2 could have an immediate impact as these two pollutants circulate out of the atmosphere more quickly.

While all regions would benefit, countries in Asia and the Middle East would see the biggest health and agricultural gains from emissions reductions, according to the study.

Some of the methods suggested by the research include capturing gas escaping from coal mines and oil and natural gas facilities, reducing leakage from long-distance pipelines, preventing emissions from city landfills, limiting emissions from manure on farms and banning agricultural burning, installing filters in diesel vehicles and upgrading cooking stoves.

RTCC Video: Check out this great video of NASA Scientist Dr Piers Sellers from the Climate Change Studio in Durban where he discussed climate modelling and the use of satellites: