Greenhouse gases to rise in wake of nuclear phase out, says IEA economist 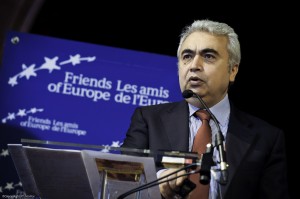 Fatih Birol warned that the world could see a rise in greenhouse gas emissions as countries turn their backs on nuclear (Source: Friends of Europe/flickr)

Following the Fukushima disaster that hit Japan in March last year, Germany has already begun to scale back its nuclear power capacity, while other countries including France and Japan are considering scaling back their programmes.

Speaking at the World Future Energy Summit in Abu Dhabi, Fatih Birol warned that the increase in coal use that would result from this move would far outweigh any boost in renewable energy.

“We will see high CO2 levels if we take out one of the major technologies that will help us deal with climate change,” he said.

While saying plans to fill the gap with renewables were bold, he warned that in reality it could have devastating impacts for the climate.

Birol also used today’s speech to once again call for a phasing out of fossil fuel subsidies, which he says ensure poorer people remain without access to energy.

“To say we want renewables, but then on the other hand give fossil fuels subsidies doesn’t work,” he said. “It’s like you go for a run and then have a big lunch of junk food.

“This is wrong – only 8% of subsidies go to the 20% on the lowest incomes. A well designed subsidy reform with direct assistance for the poor may be a very well thought out energy policy.”