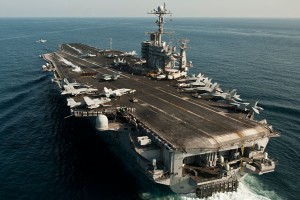 The US Navy is committed to halving its conventional fuel use by 2020 (Source: US Navy/flickr)

The US Navy and the shipping company Maersk have successfully tested a form of algae-based biofuel, it has been announced.

Maersk tested 30 tonnes of oil from genetically modified algae in collaboration with the US Navy last week.

The navy trialled 20,000 gallons of algal fuel on a decommissioned destroyer last year. It was the largest test-run of its kind. The biofuel was mixed 50:50 with conventional fuel.

“We use the same types of trucks, hoses and other dockside equipment to transfer the fuel, and no modifications are required either from a fuelling perspective or on the shipboard side,” said Lieutenant Commander Frank Kim.

“It’s going to be pretty amazing to see where these fuels take us in the future. This might be the largest demonstration to date but it is not the last.”

The two organisations represent the largest military and the largest merchant fleets in the world. Both have committed to cut their conventional oil consumption in half by 2020.

Shipping fuel is frequently very low grade. In 2009 it was alleged that the world’s 15 largest ships emitted as much pollution in a year as all of the world’s 760 million cars.