Philips chief: Have courage and follow our lead in fighting climate change 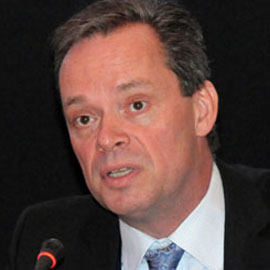 Business needs to have courage and take unilateral steps to lower emissions, according to the head of Energy and Climate Change at Philips Lighting.

Speaking at an Aldersgate Group meeting at the House of Commons, Harry Verhaar said the social and economic benefits of ‘going green’ were clear, but required a dynamic change of mindset within companies.

Verhaar used the example of his own company in pushing for a ban of incandescent light bulbs in 2006, despite their sales providing a major part of the company’s income.

“I think we made a very courageous call…also with almost equal internal lobbying as external lobbying – I can tell you, to change, and go through a transformation,” he said.

“It’s not just carbon savings, it’s money saving, and most of all you see social benefits popping up. Streets with LEDs…you reduce crime rates, increase property prices – there are examples of that in London and other parts of the UK.”

While hailing what he called a new atmosphere of ‘understanding’ at the COP17 talks in Durban, Verhaar called on governments to make more of an effort in developing a sound legally binding treaty.

And he suggested Rio+20 would be an ideal opportunity to ‘close the escape routes’ for states who signed up to the Durban Platform to buy time.

“There are clearly different mindsets of countries who signed onto that [the Durban Platform],” he said.

“Next stop Rio, we need collectively, privately, together to increase the Momentum for Change, and narrow down those escape routes. It can be done – it’s possible.”

1. The Technology is there, we shouldn’t wait for its implementation.

3. Financing mechanisms. We have frameworks in place that take care of the up-front investment, but also let’s think about it….we need to rework it – energy and the cost of labour is no longer as cheap as it was a few decades ago.

4. Communicate what benefits exist, ecological and economic benefits are real – as are social benefits.

Through that we will create a broader understanding within the public of what this means to them and thereby ensure business, politicians will provide the momentum we really need.