Today the Court of Appeal will decide whether the government can take action against a judge’s verdict before Christmas that the cuts were ‘unlawful’.

In this article for RTCC Robb argues that policy certainty is the most important factor for solar providers in the UK, without the threat of retrospective action. She also draws attention to the real threat facing the industry: the proposal to relate the Feed in Tariff to the thermal efficiency of the building on which the system is installed, as measured by its Energy Performance Certificate (EPC).

Having blown the FIT budget with the massive rush of installs prior to 12th December, what we need now is some certainty and sustained support without stops and starts.

For this reason it is tempting to wish that the government wins the appeal against Friends of the Earth, Solar Century and Homesun.

If the government loses the appeal there will be another 43.3p gold rush which will consume the ‘reallocated’ budget up in a matter of weeks. This is no good for jobs or for industry sustainability.

On the face of it, if the government wins, the 21p rate would stand and we could all get on with our jobs. Or could we?

If the government wins its appeal this means they will have been given the right ‘retrospectively’ to change the tariffs applying to installations made between December 12th and the end of the consultation period.

In the original High Court hearing the judge made the point that if the government were allowed to do this, then potentially they could also change the tariff applying to any system, including those installed before December 12th.

Where would the limitation on their power to make retrospective changes stop?

Clearly giving the government unlimited power to make retrospective changes would be a disaster for any subsidy scheme, whatever the technology or industry being supported.

A ruling in favour of the government would, at one swoop, wipe out investor confidence in any investment proposition brought to us by the UK government for many years to come.

So as an industry the best outcome is for the government to lose and for retrospective changes to be ruled unlawful.

For the industry the unfortunate consequence of that is that there will be another gold rush, albeit on a much more modest scale than before, due to the fact that most order books have been shot to pieces.

The government must move to stem the tide by laying a proposal to cut the tariff before Parliament for 40 days. They could therefore put a proposal before Parliament on Monday and bring the rates down on February 24th. Friends of the Earth are calling on them to do that.

Everybody agrees that the FIT should be cut. The rates of return were unnecessarily high and the proposed tariffs would be able to sustain a growing industry. 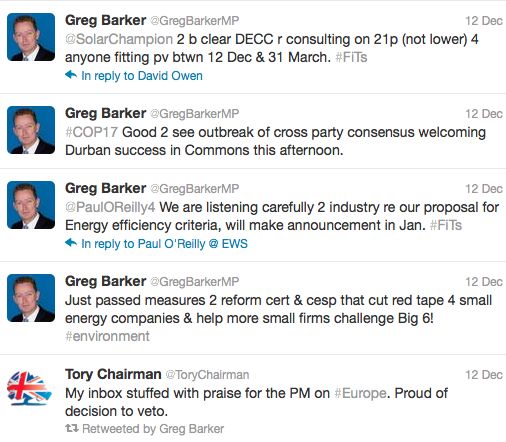 What the industry objected to is the way in which the cut was handled.

The industry had called for a cut long before the cut was made, but to no avail. Apparently DECC was using three month old data, even though ‘real time’ data is available due to the fact that every installation must be registered.

The government then pressed the panic button, and tried to pass all of the costs of their incompetence on to the industry.

As a result of government mismanagement the money that should have funded the industry through to grid parity (the point at which the cost of electricity from solar equals that from fossil fuels – predicted to be around 2016 / 2017) has run out.

As well as the ruling on the implementation of the cuts, the industry is also very concerned about the proposed introduction of the EPC requirement, relating eligibility for the Feed in Tariff to the EPC (and hence thermal efficiency) of the building on which the system is installed, despite the fact that the electricity output of the system has nothing to do with the thermal efficiency of the building.

This seems unfair. The FiT system is supposed to be encouraging small scale low carbon electricity generation. A solar PV system will generate the same amount of electricity and produce the same cut in carbon footprint of the building whether or not energy efficient measures are in place.

To put this in perspective, if I drive a Prius I pay no road tax, a subsidy worth around £250. This is to encourage take up of low emission cars. If the government wants to be consistent in its policy shouldn’t I have to insulate my home before I can qualify for the road tax subsidy?

DECC’s own figures show that the EPC requirement will lead to a 92% cut in the number of installations, which will cause the loss of some 22,000 jobs.

DECC doesn’t see solar PV as part of the long term renewable energy mix and hence seems to be finding a way to wipe out the industry, except where an installation supports other carbon reduction strategies.

The government justifies the EPC requirement on the basis that they can reach the 2020 renewable targets using other technologies that only require a 9p subsidy per kWh of energy generated whereas at the moment (post cuts) solar PV is receiving a subsidy averaging 20p per kWh.

But the subsidy has more than halved in 18 months and it is expected not to be required at all within 5 years – surely obliterating an industry which has done so well at creating jobs and at cutting its costs in the space of 18 months is madness, particularly in the current climate?

There are so many exciting technological developments on the horizon that the costs are bound to fall further. It is crazy to write off two years of investment because the government doesn’t have the vision to support the industry whilst the technology catches up with others in the renewable mix.

The UK should be leading the innovation, not lagging behind as we have been for the last 10 years.

As has been said above, the best outcome for the industry is for the government to lose and then move quickly to cut to the 21p rate. They also need to increase the budget to support the industry through to grid parity.

Finally they need to remove the EPC requirement, or at least dilute it to something less prohibitive.