LED lighting could replace 88 billion litres of kerosene a year

Two thirds of the rural population in developing countries are without electricity. This leaves limited options for lighting.

Research has shown that basic oil lamps typically produce just 1% of the light of a 100W light bulb.

As well as being more efficient, electricital lighting also removes the health risks associated with burning kerosene in a poorly ventilated space.

In the past, small solar panels could not generate sufficient power for incandescent and sodium-based bulbs. As the cost of LED lighting has dropped, this has become irrelevant. 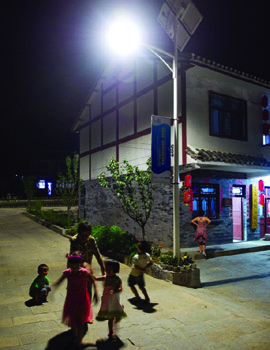 “We are at a tipping point in the LED revolution,” Harry Verhaar, senior director energy & climate change and head of strategic sustainability initiatives at Philips Lighting told RTCC.

“A global switch to energy efficient lighting can contribute a lot towards tackling climate change and saving money for families, governments and business.

“Lighting is very much at the base of development as it was in Europe and the US four or five generations ago,” he says.

The company is also working with The Climate Group and One Foundation to install solar driven LED street lighting in Guiyang, China.

Verhaar says that solar LED lighting is not just about replacing kerosene in rural communities, but can also have social and environmental benefits in urban areas.

“They can leapfrog to new technologies instead of spending on putting copper networks in the ground [for traditional lighting],” he says.

The Guiyang scheme has been chosen by the UNFCCC as a case study for its Momentum for Change program.

Part of the wider Solar LED Lighting 1000 Villages Programme− an initiative launched by The Climate Group and the One Foundation – its mission is to test policy measures and financial mechanisms in rural areas.  The five year project commenced in August 2009.

Verhaar also says that the brighter light of LEDs has been shown to improve traffic flows, reduce crime and leaves residents feeling safer.

“The initial investment is obviously higher but when you look at the performance throughout its lifespan, the technology is already cost effective.”

Philips helps interested parties get around the problem of the initial costs by offering tailored finance packages.

Loans are issued to pay for the initial cost with repayments based on the predicted energy savings. This means the buyer is never out of pocket.

Feedback from villagers in the Guiyang project indicated they were especially happy the lights are offering protection against the area’s two main threats: thieves and snakes.

RTCC VIDEO: Head of Philips Lighting Harry Verhaar tells us how their LED lighting scheme has been implemented.