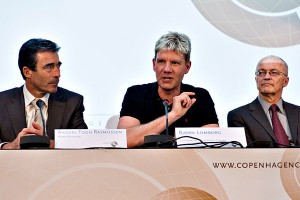 Lord Prescott has defended the UN climate change talks in the wake of renewed criticism from controversial academic Bjorn Lomborg.

Lomborg described the deal reached in Durban as a “hollow victory” and “complacent” in an online article published today.

Lord Prescott told RTCC that the process was a complex but necessary one and denied that the negotiations were failing.

“Well it’s just not true, what is his alternative? An overall cut in carbon has occurred in many countries, but what you have to deal with [now] is the high carbon models in the fast growing countries, who are doing what we did in poisoning the world,” he said.

The former Deputy Prime Minister, who was influential in the development of the Kyoto Protocol, admits there have been shortcomings but reinforced the achievements of international negotiations.

“We’ve already failed what we set out with Kyoto, it was very difficult to achieve that. If you look where we were in 1997, look at the realisation and the acceptance of the science, look at how many countries are changing. Britain did hit its target and still reduced unemployment.

“What is wrong with the negotiations is that they don’t negotiate till the last week, and then there’s this fatal idea that somehow leaders will come in and fix it across the table,” he added.

The UNFCCC conference in Durban at the end of last year saw 193 countries and the EU, agree (pdf) to start work on a collective, legally-binding deal to reduce emissions, the so-called Durban Platform.

“The agreement would come into effect only in 2020, which sounds oddly complacent when environmentalists and political leaders warned ahead of the Copenhagen conference that we had just six months or 50 days to solve the climate problem,” claims Lomborg.

“Hollow victories have been central to climate negotiations since they began. We will never reduce emissions significantly until we manage to make green energy cheaper than fossil fuels,” he said in an article for Project Syndicate. “We must focus sharply on research and development to drive down alternative energy prices over coming decades.

“The first step toward doing that is to end our collective suspension of disbelief when it comes to climate-change negotiations. We need to see through the hype and self-serving political spin. We owe it to the future to do better.”

Although not a climate change denier, Lomborg attracted criticism in 2001 when his book The Skeptical Environmentalist was published in English. The book claims that many of the world’s environmental concerns are exaggerated.

EXCLUSIVE VIDEO: Lord Prescott also spoke to RTCC in Durban to offer his take on the development of the UN talks.