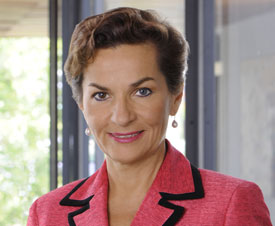 What is the Momentum for Change project and why does it matter?

Writing for RTCC, Christiana Figueres, Executive Secretary of the United Nations Framework Convention on Climate Change (UNFCCC), explains why this campaign is important.

Because while the terms climate change and sustainability are increasingly found in policy documents, thought pieces, articles and speeches, the time has come to move from words to action. Ultimately, action is the only gateway towards real change.

With funding from the Bill and Melinda Gates Foundation, the Momentum for Change initiative has two broad aims: to dispel perceptions that restrain action, and to contribute momentum towards an action-based global sustainability revolution.

Action is currently being hampered by three inaccurate perceptions: Firstly, there is a public perception that because the climate change negotiations are slow, they are not delivering and as a result, there is no or very little real action on climate change.

Secondly, there is a perception by the private sector, that it can only act on climate change without risk, once absolute policy certainty has been established at the international level.

And thirdly, there is a perception by the public, Governments and the private sector, that acting on climate change – be that adaptation or mitigation – will be so expensive that it will put everybody out of business. 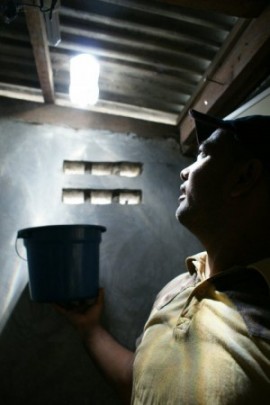 Liter of Light: Solar powered bulbs made from plastic bottles now light houses in the Philippines

The Momentum for Change initiative intends to dispel the three perceptions by creating several public platforms to showcase that important action has started taking place, that action without absolute policy clarity can be low-risk and that action can be cost-effective with win-win benefits for all.

But the need for change is larger still. Across the globe, there is an ever-growing understanding that to achieve a climate-safe world, a global sustainability revolution is needed at all levels, in all countries and in all communities.

This momentous change cannot be affected by any single action, entity, sector or institution on its own. Neither Governments nor the private sector can achieve the sustainability revolution in isolation.

It innovates, establishes trends, influences consumer behaviour and creates new business opportunities where hitherto there had been none.

To move from words to action and to move towards an action-based global sustainability revolution, these critical parts need to function together.

Due to the magnitude of the change needed, as well as economic and societal complexities, much of the future actions to address climate change will depend on successful public-private partnerships in both mitigation and adaptation.

Yet to date, the universe of such successful partnerships is small, and there is often an a-priori reservation to such collaboration on both sides.

IDEAS FOR CHANGE: Do you have a favourite design that saves energy?

In response, the Momentum for Change initiative provides a platform to showcase successful public-private partnerships at all levels that have led to real benefits for both people and the climate, while contributing momentum to the global sustainability revolution.

By considering public-private partnerships that place an emphasis on real actions with measurable impacts, the selected “Lighthouse Projects” become beacons of opportunity to scale and replicate such efforts, contributing to the global sustainability revolution.

The Momentum for Change initiative will continue to showcase success stories at future climate change conferences, thereby taking advantage of the high visibility that these occasions offer.

Additionally, 2012 will see the convening of an expert panel to review and select projects to be showcased, as well as a further call for submissions for projects that wish to be showcased. More information, including on projects, available on the UNFCCC website.

By showing the world that action has begun and that successful public-private partnerships pay off, it is our hope that the Momentum for Change initiative will contribute to opening up the action gateway towards real change.

UNFCCC VIDEO: Watch the Momentum for Change film marking the launch of the initiative.