The solar-powered bottles that light up the Philippines 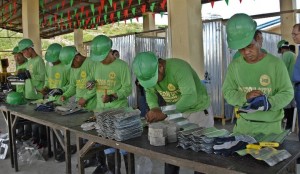 The simple design costs only $1 to make (Source: Liter of Light)

That’s the aim of the Liter of Light project, showcased by the UN as part of the Momentum for Change Initiative.

What’s more, all this can be achieved with a simple plastic bottle filled with water.

Launched six months ago by the My Shelter Foundation in the Philippines the design has now brought light to between 15-25 thousand low-income homes.

In a country where 40% of the population still lives on less than $2 a day, many are unable to afford electricity.

With large parts of the population living in informal settlements and shanty towns, where no fire hazard inspections take place, the risk of accidental and destructive fires are high, from both candlelight and poor electrics.

The project, which started out in the Philippines, has partner offices in Columbia, India and now Africa, taking their solar-powered philosophy to over 20 cities.

The light is made by filling an old plastic bottle with 10ml of chlorine and the rest with filtered water. This is then glued into a strip of metal roofing, and attached to the roof of the house.

It takes only minutes to make, and using just a hammer, rivet, metal sheet, sandpaper and epoxy it is cheap and easy to install. This means members of the local community can install the bottles themselves.

Illac Diaz, founder of My Shelter Foundation and the Liter of Light explained to RTCC why the project had been so successful.

“It is about a dollar to make, and the nice thing there is even after you initially install the first one it becomes a business”, he said.

“We only do the first hundred or thousand and then what happens is the local community starts building it themselves. They can build and install so they become the local green jobs. It is not imported; it is the bottom of the pyramid doing a green technology, which has never been done before.”

The design has proved to be a big success. Projecting the equivalent of 55W of sunlight into a room during the day, many households find they do not need any additional electrical lighting. 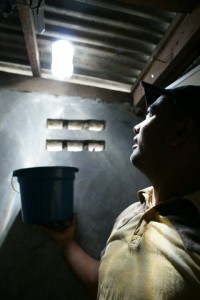 The light provides the equivilent of 55W of sunlight (Source: Liter of Light)

Mr. Demitrio Bukas, who has now installed lights in around 8,000 homes in the Philippines town of San Pedro Laguna, says demand for the product continues to rise.

“After they have learnt to save electricity they actually ask for more for the bathrooms and the main living rooms so they can save more energy,” he said. “They find it very nice especially compared to incandescent bulbs.”

“Right now they are saving a lot of money during the day by not turning on their light and then they have enough money to turn on their electricity because they only have to use a little at night.”

The design for the light was developed by a student at the Massachusetts Institute of Technology (MIT) and is based on the principles of Appropriate Technologies – providing simple and easily replicable technologies that address basic needs in developing countries.

Diaz stresses the three principles the technology and design had to live by.

It must use material available in the region, employ simple carpentry skills provided by locals, and be affordable and economically viable.

“What we wanted to do was find something that works on a large scale in the Philippines and gives people the way to do it,” he said.

“Now imagine thousands if not hundreds of thousands of grassroots entrepreneurs building green technologies all around the world and that will be the next generation impact.”

VIDEO: Do you want to know how to make your own solar-powered light? Liter of Light have a step to step how-to guide:

Impressed? Check out our story on the solar technician who aims to build 100 small power-stations in Kenya this year.