The COP17 climate talks in December 2011 were marked by huge protests from NGOs and the Occupy movement inside and outside the conference venue.

On the penultimate day these culminated in Greenpeace chief Kumi Naidoo finding himself escorted from the venue in handcuffs after leading a march on the main plenary session.

Yet countries again failed to agree on a deal that would make serious inroads into global carbon emissions – instead agreeing on a ‘roadmap’ to a deal with a legal outcome in 2020.

But in an email interview, the environmental campaigner and 350.org founder McKibben told RTCC the real focus should not be on the apparent failure of green tactics, but on the intransigence of major fossil fuel corporations.

McKibben, who was arrested outside the White House in August protesting against the Keystone XL pipeline, also reflected on the 2012 race for the US Presidency, and the importance of electing a President who believes in science.

This is the first of a series of short interviews RTCC have planned as we reflect on the COP17 climate talks, and look ahead down the road to Rio+20.

RTCC: The Green and Occupy movement was hugely active before and during Durban, but appears to have had limited effect, with even proactive organisations like Adopt a Negotiator hitting a wall with certain countries. How should the movement seek to re-engage with the wider masses following COP17…?

McKibben: I think the key role for civil society is probably to take on the fossil fuel industry around the world. The reason we’re getting nowhere in places like Durban is because the oil, coal, and gas guys have so much power in national capitals that negotiators have no bargaining room.

At 350.org anyway we’re going to continue trying to weaken their power, take away their subsidies, and expose them for the dangerous players they’ve become.

RTCC: Todd Stern once again played hardball at the negotiations. Given this is under a Democrat President, and given the Republican options on the table, is there a truly Green choice at the forthcoming US elections? And would you anticipate a more proactive US negotiating team in Qatar if Obama wins and has the security of a final four-year term? 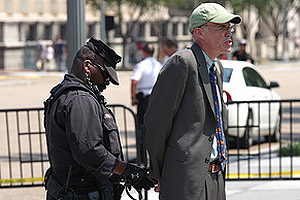 McKibben: I’m not a good prognosticator! I think it’s up to us to put pressure on whoever’s President, which is why I got arrested outside Obama’s house last year.

In general, I’d rather have a President who at least believed in physics and chemistry.

RTCC: The COP17 negotiations lasted for an extra 36 hours, and still resulted in what many label a fudge. One could conclude these talks are no longer an effective forum – but is there any alternative?

McKibben: We need some kind of vehicle for the day when national government’s decide to take this problem seriously, but that day hasn’t come yet.

RTCC: Keystone grew into a totemic issue during the Durban talks (at least for many of the pressure groups on site). Given the vociferous nature of the protests and the number of high-level activists already arrested, what would it say about the influence of the wider Green movement if Keystone eventually passes?

McKibben: Well, it will be bad. It will be worse for the atmosphere, because there’s a lot of carbon up there in Alberta.

RTCC: Finally…there is huge lobbying at the moment for Gas as a clean fuel on the one hand, and Nuclear on the other. Presumably this will only be louder at COP18 in Qatar, given that country’s history. Which fuel should green groups opt for…?!

McKibben: I think we should opt for a price on carbon that reflects the monumental damage it’s doing to the planet. Once we’ve got that, the rest will begin to sort itself out. I’m very encouraged by how quickly the price of solar is falling.

RTCC VIDEO: Will Bates from 350.org talks about his organisation’s role in Occupy17, protests inside the main Plenary at Durban and their song that spread the message of climate change over the airwaves.