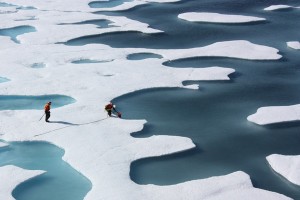 The Arctic environment is an area of special scientific interest and protection. (Source: NASA Goddard/Flickr)

A group of UK MPs has launched an inquiry into Arctic environmental protection, it has been announced.

The Environment Audit Committee will investigate the potential consequences of the commercialisation of the Arctic as oil and gas drilling and shipping routes look set to develop in the region.

Melting ice has opened new shipping routes and fishing territories. The change in conditions has also led to increased oil and gas exploration and the granting of additional drilling licences.

“We will be looking at what the UK Government can do to ensure that the Arctic is protected and whether it is even possible to drill for oil and gas safely in such remote regions,” said Joan Whalley MP, Chair of the Environmental Audit Committee.

“Concerns over climate change should be recognised internationally as a limiting factor on any new oil and gas drilling in the Arctic,” she added.

Norwegian firm Statoil became the latest firm to announce a major find. The Havis field in the Barents Sea is estimated to contain 200-300 million barrels of oil. It adds to the company’s Skrugard field of the same magnitude.

“The Skrugard and Havis discoveries will be important for industrial development and will further boost activity in the supplier industry, providing new jobs and generating spin-off effects throughout the region,” said Helge Lund, president and CEO of Statoil.

Although the UK has no Arctic territories it is an observer state of the Arctic Council.

Green groups including Friends of the Earth and Greenpeace oppose Arctic drilling on two fronts, the risk to the natural environment from a spill and the additional fossil fuels that would make additional carbon that would “throw fuel on the fire of climate change”.

EXCLUSIVE VIDEO: The changing status of the Arctic is affecting people as well as the environment. Will Vanderbilt from the Climate Change Adaptation Research Group at McGill University told RTCC about some interesting research analysing the changing lives of indigenous communities in northern Canada.