Forget what you read in the papers. Building 100 power stations in two weeks is easy.

All it takes is one man. 15 students. A few soldering irons. Some recycled photo-voltaic (PV) panels. Wire, glue, patience – and a fortnight in a Kenyan village.

That at least is the ambition of north-London based Dane Mark Kragh, who runs solar suppliers Knowyourplanet.

In six weeks time he heads to Kenya armed with his tool kit and a determination to give a village the power not only to use mobile phones, but also to build their own economy.

His aim is to teach 15 villagers to assemble their own small solar PV power stations from scrap, and in doing so leave them with skills to sustain a cottage industry for generations. 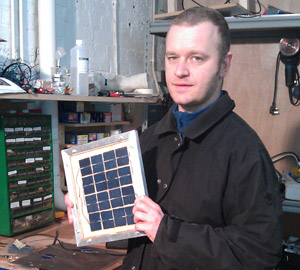 Kragh's solar devices are made from 15 components, including recycled PV panels

“Originally we had approval for a larger project at a school that cost a similar amount, but I didn’t like it, because if I’d left and it wasn’t working, then what?” Kragh told RTCC.

“You’d have this great fancy system on a roof. It would need maintenance, components would break, and just because there’s money allocated now it doesn’t mean there will be in four years.”

He will supervise the assembly of 100 small solar units, but will leave behind the raw materials for 2000, which he hopes will ensure this is a sustainable enterprise.

“The idea is that we go out, train three groups of five, who will then work independently in their own groups,” Kragh says.

“I’ll start them out and then supervise them. I’m all for letting people figure things out for themselves, and then hopefully they can support each other and make the chargers long after I’m gone.”

Aside from the recycled PV panels that Kragh will bring with him from the UK, the mini power-kits are simple devices, consisting of no more than 15 components.

Kragh stresses that simplicity is vital. If a panel breaks down it should be easy to fix. In essence it is just a series of small PV panels soldered together, and connected to a USB stick, which can then be attached to a phone.

IN PICTURES: 8 steps to build a solar power station

Mobile phone ownership in Africa has soared in recent years. In 1999 it was estimated that 16 million owned a phone, now that figure stands at 376 million, and is rising sharply.

Phones provide more than simply social benefits. Increases in mobile ownership have been linked to improvements in human rights by Amnesty International, and to a boom in small enterprises by the UN.

They enable isolated villages to access services that would otherwise be impossible for them to use.

Farmers can check weather forecasts that could affect their crops, women can gain control of their financial affairs through telephone banking, children can access education services, and in the event of a medical emergency, a remote doctor can be contacted.

The sun is the perfect source of energy for Kenya’s phones: A 2007 World Bank report stated the country’s solar resources are equivalent to 70 million tons of oil.

Power will not be a problem – all that remains is for Kragh to start soldering his panels together, and given the amount he has staked on this project, he says failiure is not an option.

“If there’s something that doesn’t work out the way we want it to work out we’ll fix it, and if we have setbacks I’m hoping we turn it into a positive experience.”

RTCC VIDEO: Knowyourplanet’s Mark Kragh explains how easy it is to build a small power station at home.