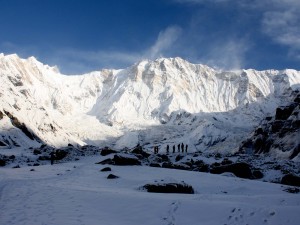 A climate sceptic website has offered $500 to anyone who can ‘debunk’ a UN film on glacier melt in the Himalayas.

The film, ‘Himayalan Meltdown’ is a joint project between the UNDP, Arrowhead Films, and Discovery Channel Asia.

It will be given a special screening at the US State Department today (Monday) ahead of a panel event to discuss the impacts of glacier melt in the Himalayas.

However, the event has received  attention from the website junkscience.com.

It is offering $500 to anyone who will attend the event and ask a question on camera “that aims to debunk the notion that global warming is causing the Himalayan glaciers to disappear’.

Glacier melt in the Himalayas has remained a controversial issue since 2007 when the region found itself at the heart of what was called ‘glaciergate’.

The Intergovernmental Panel on Climate Change (IPCC) had predicted glaciers would disappear by 2035. In 2010 IPCC head Rajendra Pachauri admitted the report was flawed, but said glaciers were melting at a faster pace than previous studies indicated.

This position was backed up last month by new research published by the International Centre for Integrated Mountain Development – the body that tracks glacier retreat across the region.

The research release coincided with Mountain Day at the UN Climate Summit in Durban last month and found widespread glacial retreat in all areas of the Himalayas.

The UNDP film examines how the shrinking Himalayan glaciers and rising sea levels are affecting people in China, India, Bangladesh, Nepal and Bhutan.

Speaking at the film’s premiere last June, Helen Clarke, head of the UNDP said: “We will see the impact on the Asian river valleys flowing from the Himalayas – the mudslides from the shifting monsoon rains, the changing mountain terrain, and new areas of drought – all posing considerable risk to human life and to the well-being of more than a billion people.

VIDEO: The 45-minute film was first released in June 2011, at the Asia Society in Washington and New York, and will be shown to the US State Department audience for the first time today.