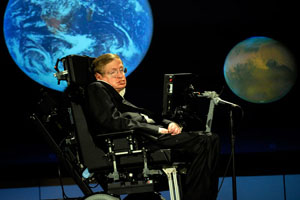 As cosmologist Stephen Hawking celebrates his 70th birthday he warns that climate change is one of a greatest threats posed to the future of human-kind and the world.

In an interview ahead of his birthday this Sunday (8 January), Professor Hawking spoke to BBC’s Radio 4 Today Programme and answered questions put to him by listeners.

He said: “It is possible that the human race could become extinct but it is not inevitable. I think it is almost certain that a disaster, such as nuclear war or global warming will befall the earth within a thousand years.”

He also said it was essential humans colonise space to allow them to spread across the universe.

It is a warning Professor Hawking has been sharing for years. Back in 2007 – speaking at the Royal Society in London – he called on scientists to live up to their duty of sharing information about the potential disaster of climate change, referring to it as one of the greatest threats facing human-kind.

“As we stand at the brink of a second nuclear age and a period of unprecedented climate change, scientists have a special responsibility, once again to inform the public and to advise leaders about the perils that humanity faces,” he said. “As scientists we understand the dangers of nuclear weapons and their devastation effects, and we are learning how human activities and technologies are affecting climate systems in ways that may forever change life on Earth.

Another interview highlight for Hawking fans this week, he admitted to New Scientist that, despite being one of the World’s greatest minds, he still spent a lot of time pondering women, who remain a “complete mystery” to him.

Professor Hawking will turn 70 on Sunday. His birthday is being marked this week with an international conference at Cambridge University in his honour.