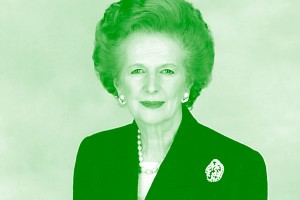 She was the most divisive of political figures, but looking back, Thatcher’s environmental policies reached across political divides.

Before becoming The Iron Lady, played by Meryl Streep in the film of the same name, Baroness Thatcher was a chemist. This scientific awareness was demonstrated by her response to the early presentations of concerns surrounding rising levels of greenhouse gases.

Addressing the UN General Assembly on environmental degradation in 1989 she said: “The result is that change in future is likely to be more fundamental and more widespread than anything we have known hitherto.

“Change to the sea around us, change to the atmosphere above, leading in turn to change in the world’s climate, which could alter the way we live in the most fundamental way of all.

“That prospect is a new factor in human affairs. It is comparable in its implications to the discovery of how to split the atom. Indeed, its results could be even more far-reaching,” she said.

At the time environmental issues were only just beginning to gain a mainstream foothold and were thought of by many as the exclusive domain of the liberal left.

“We should remember that Margaret Thatcher’s background was that of a trained scientist, and the environment was always something she was going to take a keen interest in,” Angie Bray, Conservative MP for Ealing Central and Acton told RTCC.

“Certainly, as Prime Minister in the late 1980s, she was one of the first world leaders to spell out the need to protect our environment for future generations,” says Bray.

She believed that local level pollution issues could be solved by replacing poorly run municipal services with privately-run enterprises. She warned against the “cranks and romantics” of the “environment lobby” in her autobiography.

Crucially however, she separated these issues from that of global atmospheric pollution, where she took a much stronger line. It is specifically on climate change where it becomes harder for environmental groups to criticise her record, regardless of how they may feel about her overall performance as Britain’s longest serving Prime Minister of the 20th century.

She told the Royal Society in 1988 that “it is possible that with all these enormous changes (population, agricultural, use of fossil fuels) concentrated into such a short period of time, we have unwittingly begun a massive experiment with the system of this planet itself”.

Murray notes that in her book Statecraft, published in 2002, she was critical of how the climate change process had developed and was wary of it being misused by the left to push their agenda on other topics.

She wrote in 2002: “Whatever international action we agree upon to deal with environmental problems, we must enable our economies to grow and develop, because without growth you cannot generate the wealth required to pay for the protection of the environment.”

Ten years later, this economically-bounded approach to climate change has been more or less paraphrased by the UK’s coalition government today. George Osborne said in October 2011 that “we’re not going to save the planet by putting our country out of business”.

It is disingenuous to call Thatcher an early green leader, but she recognised that climate change needed to be addressed long before her contemporaries and her mark is clearly visible in many environmental policies today.