The author of a scrapped chapter on climate change in Newt Gingrich’s new book has spoken about the ‘abuse’ and ‘obscene’ messages she and fellow climate scientists have received.

Gingrich ‘killed’ the chapter after criticism from influential talk-show host Rush Limbaugh last week, with a surprised Hayhoe Tweeting she had spent ‘100+ hours’ working on it.

Climate change is a politically toxic issue in the USA, with only one of the six Republican candidates for President accepting it is a problem, and Hayhoe told RTCC she was shocked at the increased level of vitriol directed at her and fellow climate scientists over the past few years.

“I open up my mail in the morning and delete 10, read one, delete 10 more, read one. There are blogs that are devoted to blogging about how I’ve lied about X, Y and Z,” she said.

“Somebody filed a complaint with the Press Complaints Commission in the UK stating I had lied, by saying that winter temperatures in Texas are getting warmer, which they certainly are. The abuse, the virulence, the hatred is astonishing.

“I mean I got an email the other day so obscene I had to file a police report. They mentioned my child. It had all kinds of sexual perversions in it – it just makes your skin crawl, but I take heart from the fact that my colleagues have gone before me – this is not unusual.” 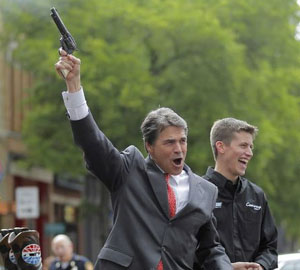 The emails embody the dark side of the polarisation of US politics. As Jim Di Peso from Republicans for Environmental Protection told RTCC before Christmas, even a few years ago concerns over the climate and environment were shared on both sides of the Senate. Not any more.

Now any belief in climate science or even evolution – as Tom Chivers from the Daily Telegraph observed earlier this week – is likely to see Republican candidates for President lose in the polls.

This places natural conservatives like Hayhoe in a difficult position. As an Evangelical Christian she comes from a constituency that has often branded climate change a hoax.

The result is an unenviable path. Fall in with the current consensus or risk ridicule. A tactic Mitt Romney and Newt Gingrich – both men who previously warned about the effects of climate change – have employed.

“I think that when you look at their track record people have said one thing and then they have said another thing later,” Hayhoe said.

“So it’s fairly clear that many people have changed what they are saying. I feel like what has happened to me is that it is unacceptable for anyone to be moderate, to be sensible, to be logical, to be conservative and in the middle.

“It’s unacceptable right now for anyone to be in the middle, so everybody is being pushed to one side or the other, being stereotyped or caricatured really.”

And yet amidst the anger, accusations and hyperpole, there are glimmers of hope from the most unlikely of sources.

Hayhoe is often to be found speaking to groups in Texan churches, schools and other public centres engaging with the public and explaining why she believes climate change is a threat.

In 2011 she addressed some petroleum engineers in the middle of Texas, which is the heart of oil country, the origin of many attacks on climate scientists, and a message from one of the men she spoke to has given her strength over the last week.

“Most of them disagreed with what I had to say, but I got an email in the past week from one of them who said ‘I still disagree, but I just wanted to tell you that you don’t deserve anything that they are saying about you because you were courteous, respectful towards me and I felt we had a good interaction’,” she said.

“I thought – that was the best email. We can still disagree but we can still talk about it and we can still respect each other. That email embodies what is missing in the larger dialogue.”

Contact the author of this article on [email protected] or @rtcc_edking

RTCC VIDEO: Rear Admiral David W. Titley explains how the US Navy is preparing for the likely consequences of dangerous climate change.

David W Titley from Responding to Climate Change on Vimeo.