2011 was one of the costliest years on record in terms of natural catastrophe losses, according to new research. 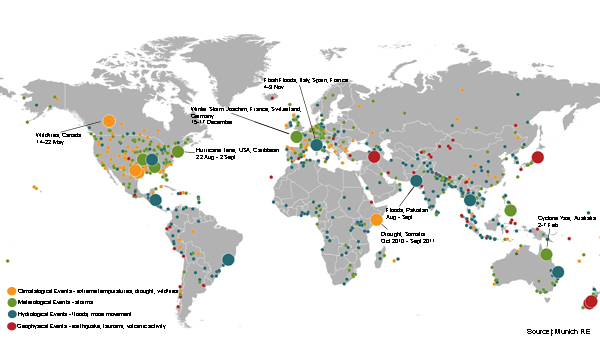 This was nearly two-thirds higher than 2005, which held the previous record at £220 billion.

According to research by insurers Munich RE, while two thirds of economic losses came from geophysical events, principally large earthquakes, 90% of the recorded natural catastrophes were weather related.

With storms battering shores from the USA to Australia to Asia, flash floods in Europe and with snow storms intertwined with heatwaves, 2011 saw an extraordinary level of extreme weather events.

Torsten Jeworrek, from Munich RE, believes the volume of events last year was unprecedented.

“A sequence of severe natural catastrophes like last year’s is a very rare occurrence. We had to contend with events with return periods of once every 1,000 years or even higher at the locations concerned,” he said.

Last year also saw a stark warning from Intergovernmental Panel on Climate Change, who reported increased evidence of the link between climate change and weather events, predicting that these types of events were set to become more frequent.

Costs from these disasters were not only financial either. Munich RE say around 27,000 people fell victim to natural disasters in 2011, not including the thousands who died as a result of famines following the drought in the Horn of Africa.

RTCC VIDEO:  Climate risk expert Professor Richard Klein from the Stockholm Environment Institute gives us his thoughts on what an acceptable level of risk is.