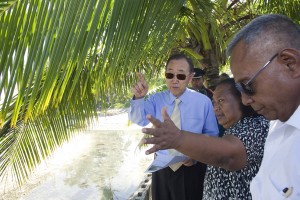 UN Secretary-General Ban Ki-moon has identified sustainability as the key component of his second five-year term in office, which began on Sunday.

Ban said he would target a number of development issues that are directly related to environmental change.

“We have to connect the dots among climate change, [the] food crisis, water scarcity, energy shortages and women’s empowerment and global health issues,” said Ban in an interview with UN Radio. “These are all interconnected issues.”

Ban also discussed an incident while visiting the South Pacific island of Kiribati that exemplifies why he wants climate change must be placed at the top of the global agenda.

“He appealed to me to ‘Please help us address this climate change. Our homes and our way of life may be swept away overnight’,” said Ban.

2012 is the UN Year of Sustainable Energy for All and of the Rio+20 Summit in June.

Rio+20 will focus on sustainable development from an economic and an institutional perspective. The original Rio summit led to the development of three UN conventions tackling climate change (UNFCCC), desertification (UNCCD) and biodiversity (UNCBD).

Watch the interview with UN Secretary-General Ban Ki-moon below