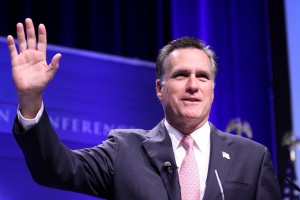 Mitt Romney was the front runner for the Republican nomination at the time of the first vote in Iowa. (Source:Wikimedia/Gage Skidmore)

The first in a round of polls to find the Republican Presidential nomination kicks-off in Iowa today. RTCC examines the candidates’ track records on climate change.

There are few surprises in the stances of the seven remaining candidates. All but one rejects scientific consensus. Several have changed their positions in recent years while some have consistently described climate change as “absurd” and “a hoax”.

New York Mayor Michael Bloomberg, himself once thought to be a contender for the 2012 Republican nomination, described the anti-science position of the candidates as “mind-boggling”.

Whoever eventually runs against President Obama is likely to be on a collision course with the current administration.

In June 2011, Romney (who was leading the polls at the time of print) broke ranks with his fellow contenders by stating that he believed the world was getting warmer and that humans had made a contribution to that warming.

“I think it’s important for us to reduce our emissions of pollutants and greenhouse gases that may well be significant contributors to the climate change and global warming,” he said.

“My view is that we don’t know what’s causing climate change on this planet” he said. “By the way, they do not call it America warming, they call it global warming. So the idea of America spending massive amounts, trillions of dollars to somehow stop global warming is not a great idea.”

Romney also says he would target energy security independent of the “oil cartels” by “developing our oil, our gas, our coal, our nuclear power”.

He has also publicly dismissed cap and trade systems.

RTCC Verdict: 3/5 Current position doesn’t go far enough but has shown more awareness then his rivals in the past.

Gingrich also appears to have reversed his views on climate change. Most recently, it was revealed that he had pulled a chapter on the subject from his book.

The author of this chapter, Katharine Hayhoe, an atmospheric scientist at Texas Tech said in an interview prior to the decision: “It is primarily laypeople, such as talk-show hosts, or those with vested interests in maintaining the status quo, who are perpetuating the idea that there is no scientific consensus.”

After right wing radio talk show host Rush Limbaugh, picked up on the quote and described her as “one of Newt’s experts”, the chapter was dropped. The author, who says she spent 100 unpaid hours on the chapter, was unaware it had been scrapped until asked about it by journalists.

She later tweeted: “Nice to hear that Gingrich is tossing my climate chapter in the trash. 100+ unpaid hrs I cd’ve spent playing w my baby [sic]”

In 2008, Gingrinch and then Speaker of the House Nancy Pelosi filmed a climate action campaign ad together. Gingrich has described it as the “dumbest thing I’ve done in the last four years”.

RTCC Verdict: 3/5 Clearly pandering to voters and media. May return to previous stance if elected.

The former-lawyer has at least been consistent with his climate change policy.

He describes climate change as a “liberal conspiracy” to develop “more government control of your life” and says he has always rejected the “junk science” behind it.

Giving his view on climate science to Rush Limbaugh he said: “I believe the earth gets warmer and I also believe the earth gets cooler, and I think history points out that it does that and that the idea that man, through the production of CO2 — which is a trace gas in the atmosphere, and the manmade part of that trace gas is itself a trace gas — is somehow responsible for climate change is, I think, just patently absurd.”

Santorum, who backs the intelligent design theory over evolution, has been gaining traction with evangelical voters in the build-up to the first vote in Iowa.

RTCC Verdict: 0/5 Dangerously inaccurate and misinformed. Fiercely anti-science and disinterested in evidence, which is strange for a lawyer.

Perry’s star has fallen as the campaign has developed. He was arguably the most outspoken of the pack in the early days and climate change was a topic the Texas governor returned to again and again.

He has accused researchers of manipulating data to get funding and claimed that scientists were “questioning the idea that man-made global warming is what is causing the climate to change” on a daily basis.

This is likely a reference to a petition said to include more than 30,000 scientists questioning the veracity of climate data. The campaign does not check that signees have any scientific credentials instead asking for participants to tick a box to confirm that they are indeed qualified experts.

RTCC Verdict: 1/5 Less articulate with his scepticism than Santorum. History of meddling in environmental reports in Texas.

Libertarian Ron Paul has built his 2012 campaign on honesty and consistency. He has however been lacking the latter on his global warming position.

In 2008 he said he looked at climate change “objectively” and believed that human activity was affecting the climate to an extent.

But in 2009 he described “global warming terrorism” as a hoax.

He has said his energy policy would be opposed to fossil fuel subsidies and that the country would not go to war over its oil interests under his charge. He is against the cap and trade system.

RTCC Verdict: 2/5 His energy policy is encouraging but jumped on “climategate” bandwagon with fervour.

Huntsman has much in common with front-runner Romney. Both are Mormons and both have successful business and political careers under their belts. Huntsman, however, differs from all the other candidates in one key way, he is pro-science.

“To be clear, I believe in evolution and trust scientists on global warming. Call me crazy. The minute that the Republican Party becomes the anti-science party – we have a huge problem,” he said.

The latest polling data has Huntsman rock bottom of the seven candidates on 1%.

The Tea Party-backed Minnesota congresswoman has described climate science as “manufactured”. Like Perry she gained notoriety early in the campaign but has seen her support wane in recent months.

She told the House of Representatives in 2009 that carbon dioxide cannot be harmful because it occurs in nature.

“Carbon dioxide is natural. It is not harmful. It is part of Earth’s life cycle…And yet we’re being told that we have to reduce this natural substance and reduce the American standard of living to create an arbitrary reduction in something that is naturally occurring in the earth.”

RTCC Verdict: 0/5 Elementary understanding of the topic lacking. Not interested in facts. Top marks for consistency though.