Thirst for water a sinking point at Israel-Palestine talks 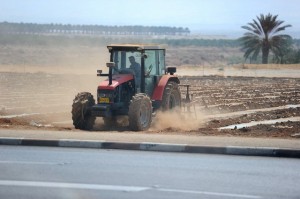 Talks this week between Israeli and Palestinian officials end a 16-month long stalemate between the two parties.

These stalled in 2010 after Israel refused to renew a partial freeze on Jewish settlements in the occupied West Bank, but as talks begin looking to renew the process, water scarcity could prove to be another sticking point.

Israel and the West Bank are served by the Jordan River, along with Syria, Jordan and Lebanon, ensuring water scarcity is a highly contentious political issue in the area. Nowhere is this felt more than in the Israeli-Palestine conflict.

Both sides rely heavily on two aquifers for their water supply, much of which lies underground the West Bank, and is used for drinking as well as agriculture.

Research indicates that global warming will cause the region to become even more arid, placing extra pressure on water resources and increasing the chances of massive forest fires similar to the ones that engulfed Carmel in 2010.

Israel uses more water per capita than any other country in the region, and its government has long recognised the dangers of running out of water. In 2002 the country’s Ministry of Foreign Affairs labelled it a ‘chronic problem‘.

Under the 1993 Oslo Accord, Israel recognised the water rights of Palestinians, although this did not always directly translate into policy.

While Israel extracts large amounts of water from the underground aquifers, Palestinians face bureaucratic restrictions and delays on their own projects – leaving many thousands in the West Bank unconnected to a water network.

Palestinians say that the occupation by Israel has meant they are denied of their water rights, living on 50 litres of water a day, while Israeli settlers enjoy 280 litres.

Regional expert Dr Polly Pallister-Wilkins, a fellow at the School of Oriental and African Studies, told RTCC this disagreement was a source of longstanding disagreement between both parties.

“Water is already an issue preventing the end to the Occupation as Israel will wish to maintain its control of water as a material resource from which it materially benefits.

“The Palestine national movement as a whole is unlikely to see water scarcity as an issue over which to come together and negotiate. The question they will ask is why there is a water scarcity in the first place?”

Environmental NGO Friends of the Earth Middle East (FoEME) however, believe that the shared threat of water security could be a way of bringing countries in the region together rather than further exacerbating conflict.

Since 2001, their “Good Water Neighbours” project – aimed at raising awareness of shared water problems – has brought together 29 cross-border communities.

Speaking to Al Jazeera last July Nader Al-Khateeb, Palestine director of FoEME said it was a “shame that water is being used as a form of collective punishment when it could be used to build trust”.

“I believe that the issue of water needs to stay out of the conflict; water can, and should, be the basis for cooperation.”

Water scarcity could also be the foundation for more conflict, increasing the pressure on negotiators at both the Israeli-Palestinian talks and at the UN climate discussions to work on long-term solutions to prevent resource wars becoming commonplace.