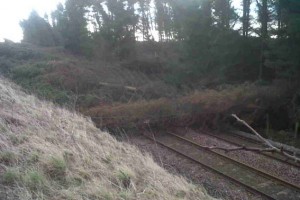 The resilience of UK infrastructure was severely tested on Tuesday as storms battered the north and west of the country.

Winds reached more than 90 mph in some areas with transport and electricity supplies affected.

The UK is expected to experience an increase in the number of extreme weather events including an increased level of storminess as a result of climate change.

The rail network was severely disrupted with fallen trees and other debris blocking routes. Some of the blockages were to large to be cleared by maintenance crews who were forced to wait for specialist cranes to be brought in.

Several road bridges were closed due to the danger of crosswinds. Airports were also affected with severe disruption reported at Glasgow airport and widespread delays affecting most flights across the country.

More than 70,000 homes were reported to be without power in Scotland as a result of the storm. The BBC reported that a further 8500  were powerless in England and a further 10,000 in Northern Ireland.

The UK Climate Change Act 2008 requires major utility and transport firms to report on their adaptation plans for the increase in extreme weather events experienced in the country and longer term effects of climate change such as coastal erosion.

Network Rail, one of the companies required to report, owns and operates UK railways and major stations, has already begun work on adaptation. Diane Booth, the firm’s head of environment policy recently told RTCC about some of the areas it is concentrating on.

“The environment effects our operations already and we sort of know where we have hotspots. We tend to build our response to them around the fact we know they’re hotspots,” said Booth.

“We have areas of the network that flood in high rainfall and others where the operations are right on the seawall itself.”

The UK is not alone in experiencing an increase in potentially climate related disasters.

The US suffered 12 individuals disasters in 2011 that caused more than $1billion each.

While severe storms can seriously disrupt a developed nation, many developing countries are dealing with far greater problems. Dr Saleemul Huq of the IIED told RTCC about adaptation strategies in Bangladesh, which is faced with major flood events and rising sea levels.