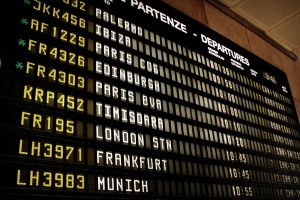 All flights landing or departing from EU airports will be included in its cap and trade system. (Source: Liquene)

The European Court of Justice has dismissed claims by the US that the proposed inclusion of international airlines in the EU carbon trading scheme is illegal.

The much anticipated, but largely expected, ruling means that all flights taking-off or landing at EU airports will be included in the EU Emissions Trading Scheme (ETS) from January 1, 2012.

EU Commissioner for Climate Action said: “I am of course very satisfied to see that the Court clearly concluded that the EU Directive is fully compatible with international law. A number of American airlines decided to challenge our legislation in court and thus abide by the rule of law. So now we expect them to respect European law. We reaffirm our wish to engage constructively with everyone during the implementation of our legislation.”

Last week US Secretary of State Hilary Clinton said if the ruling went against the US, Washington would “be compelled to take appropriate action”.

It has been suggested that the US may set-up a retaliatory scheme and use the funding to compensate US airlines.

Trade body Airlines for America (A4A) has said that it could now pursue the case in the High Court in the UK.

“Today’s court decision further isolates the EU from the rest of the world and will keep in place a unilateral scheme that is counterproductive to concerted global action on aviation and climate change,” the group said in a statement.

“Today’s decision does not mark the end of this case and Airlines for America (A4A) is reviewing options to pursue in the English High Court. At the same time, the US government and dozens of others around the world are increasing pressure on the EU to come back to the table to consider a global sectoral approach. In the meantime, A4A members will comply under protest and will continue to operate safely and efficiently to Europe when the scheme takes effect.”

The EU announced in September that 85% of airlines allowances would be awarded for free in the first year of the scheme and 82% in 2013. It is estimated to raise between €2.4 and €3 billion.