Arnie tells Republicans not to be “narrow minded” over Solyndra 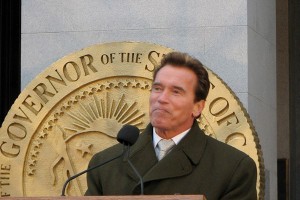 Republican presidential candidates should not be “narrow minded” over the Solyndra affair, according to former Californian Governor Arnold Schwarzenegger.

Solar panel manufacturer Solyndra went bankrupt after receiving a $535 million loan from the US government. But Schwarzenegger has urged his fellow Republicans against using the furore to dismiss the entire industry.

“At the same time [as Solyndra] there were restaurants that failed, manufacturers that failed… all kinds of businesses failed and no one talks about them,” said Schwarzenegger at a meeting with current Californian Governor Jerry Brown.

“They did the best that they could and they made mistakes. That’s what happens in business — if you make mistakes you fail,” he said, adding that Republican presidential candidates should “not use those simple things like Solyndra and say, ‘Look they failed, so therefore that industry is no good.’ The industry itself – solar has a huge future.”

He called on business to step up to the mark on climate change.

“Since government doesn’t have its act together, it’s up to business to step in,” said Branson.

Branson’s airline is pressing ahead with biofuel use. He also launched the Virgin Earth Challenge in 2007 offering a $25 million prize for a science and technology project that can remove carbon dioxide from the atmosphere.

“If one could retrofit buildings to make them more efficient, and if new buildings could be built to current standards, it’s really a win-win situation,” said Pachauri. “Overall, the building sector has the largest potential for the reduction of emissions.”

At the UN climate change negotiations in Durban, Pachauri told RTCC of the need for urgent action in order to limit the effects of dangerous climate change.