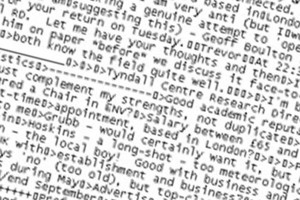 All the scientists affected by the stolen emails were cleared of any wrongdoing.

Police investigating the so-called ‘climategate’ scandal have seized computer equipment from a home in Yorkshire, England.

According to The Guardian, two laptops and a broadband router were taken from a house belonging to Roger Tattersall, who runs one of the climate sceptic blogs on which the links to the leaked emails appeared.

The emails detailed exchanges between climate change scientists and were used out of context to discredit those involved and to accuse them of collusion over data. All the scientists involved were cleared of any wrongdoing.

Tattersall posted on his blog: “An Englishman’s home is his castle they say. Not when six detectives from the Metropolitan Police, the Norfolk Constabulary and the Computer Crime division arrive on your doorstep with a warrant to search it though.”

The emails were hosted on a Russian server suggesting that Police hope to be able to trace it from Tattersall’s equipment. There is no suggestion that Tattersall was responsible for acquiring the data.

Tattersall was questioned in the aftermath of the first ‘climategate’ scandal in 2009 but no action was taken.

A second release of stolen emails was made in November.

This prompted the University of East Anglia to state: “As in 2009, extracts from emails have been taken completely out of context. Following the previous release of emails scientists highlighted by the controversy have been vindicated by independent review, and claims that their science cannot or should not be trusted are entirely unsupported. They, the University and the wider research community have stood by the science throughout, and continue to do so.”