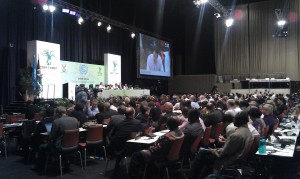 Scientists have warned RTCC that the Durban Platform leaves the world on a pathway to 4 degrees.

Under the agreements, a new legally binding agreement will be decided by 2015 and in force by 2020.

With a second commitment of Kyoto to bridge the gap currently offering no increased ambition, scientists warn this date is far too late.

In an email to RTCC Asher Minns from the Tyndall Centre said: “In some analysis using cumulative emissions the year to peak global emissions is 2015 (and in a couple of notable cases, earlier than the year the study was carried out).

“The reduction of emissions per year to achieve this (2 degrees) afterwards is significant and hugely challenging year on year to the end of the century. So yes, it (2020) is too late to prevent a global warming of 2 degrees.”

Bill Hare, Director of Climate Analytics echoed this saying: “What remains to be done is to take ambitious actions to reduced emissions, and until this is done we are still headed to over 3 degrees warming. There are still no new pledges on the table.

“What was positive in Durban is that governments have reopened the door to a legally binding global agreement involving the world’s major emitters, a door which many thought had been shut at the Copenhagen Conference in 2009.”

Minns said current research, all released within recent weeks, shows that on average the world is expected to warm by at least 3.5 degrees 2100. This includes research from the Potsdam Institute in Germany, the Hadley Centre in the UK – which saw changes in most of the 24 regions studied – the UN Environment Programme and the International Energy Agency.

Add to this the latest report from the Intergovernmental Panel on Climate Change linking climate change and extreme weather and the latest International Centre for Integrated Mountain Development research which found glacier retreat accelerating and you build up a bleak picture of the challenge ahead.

Two degrees has long been hailed by scientists as the upper limit to which average temperatures should be capped to avoid runaway climate change. However, even at this temperature scientists warn that the world would see changes, and many nations – particularly low lying islands – have called for this level to be lowered to 1.5 degrees.

Currently the world has average temperatures at 0.8 degrees above industrialised levels.

A release by the IPCC following the COP17 highlights “emissions of the greenhouse gases that contribute to global warming must fall by 2050 by 50-80% globally compared to the emissions of the year 2000 and that global emissions must peak well before the year 2020, with a substantial decline after that, in order to limit the growth in global average temperatures to 2 degrees.”

They warn this must be “borne in mind in the package.”

The latest Carbon Action Tracker briefing – a joint project between consultancy firm Ecofys, Climate Analytics and the Potsdam Institute – examined what the world would be facing at 4 degrees.

Bringing together scientific literature, the report compares a 2 and 4 degree warming, and warns the severity of climate impacts will increase with mean temperature while the climate tipping points would respond abruptly when certain thresholds are crossed – posing further risk.

While two degrees will already see some species loss this could be seen on a much larger scale at 4 degrees, while in the ocean the threats to corals could also increase with higher temperatures – partly due to the greater acidification of the oceans.

A similar trend can be seen in crop decline. For example at 2 degree scientists predict a risk of crop yield decline of 20% for millet in Sahel Africa, while a 3-4 degree increase could see the yield loss potentially double.

Sea levels – projected to raise by up to 80cm at 2 degrees – could rise by up to a metre at 3.5 degrees, while there will also be a higher risk of the Greenland Ice destabilising and the West Antarctic ice sheet disintegration. Meanwhile glacier melt could leave many in Central Asia and South America with reduced water availability.

While diplomacy and negotiating the Kyoto Protocol and what comes after it must continue, as both a way of reducing emissions and funding adaptation in poor countries, Minns says that science must now also examine the world we may be inheriting.

“I think science and research and the knowledge economy has to quickly understand about coping with a 4 degree world – food, water, agriculture, ecosystems, where people live,” he said. “And based upon this knowledge, academia also needs to learn to suitably train and equip professional and leaders for a world with a different climate than the one you and I live in today.”

The Durban Platform – while leaving the world at risk – does provide a base from which commitments and ambition can grow, and there is still an opportunity for countries to bring into force some clear commitments prior to and in line with the 2020 deadline.

And while commitments may not have been as strong as the science would have wanted, it does at least leave the door open to future negotiations.

In his review of COP17 Nick Mabey of E3G says: “Durban could have definitively shit the door on the climate secure future. Many large countries came here looking to continue a system of voluntary emissions reductions. This would have locked-in a 4 degree plus world. The efforts of the new “Green Coalition” of countries have prevented this disastrous outcome.”

While sharing a similar sentiment Niklas Höhne, Director Energy and Climate Policy at Ecofys warns that time is quickly running out.

“There are still options available to close the gap between current globally planned mitigation and what is needed to hold warming below 1.5 or 2°C – if action takes place fast,” he said. “Emission reduction options are rapidly diminishing.”

And while the global politics continues to be held up in negotiations and diplomacy, Minns sees a role for research in keeping the world off a path to catastrophic climate change.

He said: “Research needs to understand a lot more about the economies of stimulating the emission reductions that business and civil society can deliver that global politics cannot, at least not until 2020 and beyond.”