Speaking out on Durban: COP17 in quotes 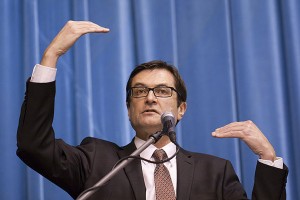 The Durban Platform has proved to be a divisive document. RTCC looks through some of the responses from the world of politics, diplomacy and key campaign groups.

“We need to modernise the international climate change framework and that is what has been achieved here – developing countries including China have agreed that along with developed economies including the United States and Australia – that we’ll all be in the same deal and it would take effect in 2020 and that is really a very significant breakthrough.”

“We’re happy that this major success was achieved, despite so many different points of view. And we showed, and other people also showed, great flexibility.”

“What people had hoped for was to look at the Kyoto Protocol and make revisions so it would be more effectively applied, especially by those powers that didn’t ratify it initially. But that couldn’t be finalised, and differences remain among some of the world powers.”

“In the end governments did just enough to salvage a path forward for further negotiations. But we shouldn’t be under any illusion – the outcome of Durban leaves us with the prospect of being legally bound to a world of 4C warming. That would be catastrophic for people and the natural world.”

“[The four texts agreed in Durban are] not as ambitious as the European Union hoped for. But together they represent a real step forward. It’s a small movement [by China] but that made the US budge and also pulled India along.”

“Let’s be clear, as the delegates say as a precursor to most speeches, the deal that has been done in Durban is not good for the future of the planet, or the poorest and most vulnerable people. Negotiators have sent a message to the world’s hungry: ‘Let them eat carbon’.”

“The outcome in Durban is a coup for Africa. Issues that had taken so long to resolve have been resolved on our soil. We are very happy and proud of the South African team that worked so hard with the UNFCCC to make Durban succeed. This is a moment of glory for South Africa and Africa.”

“The good news is for the first time, we have a road map that is supported and signed by all the governments. However the question mark I have in my mind is, I hope this road map won’t lead some of the countries not to act for the next 10 years or to act inefficiently.’”

“The Secretary-General welcomes the package of decisions known as the Durban Platform that was reached by the 194 parties to the Climate Change Convention in Durban today that will guide global efforts to address the causes and impacts of climate change. The Durban Platform represents a significant and forward agreement that defines how the international community will address climate change in the coming years.”

“What we have done today is a great success for European diplomacy. We have managed to put this on the map and take the major emitters – the US, India and China to a road map that will secure an overarching deal.”