UKYCC: Post COP17 we’ll continue to fight for our future 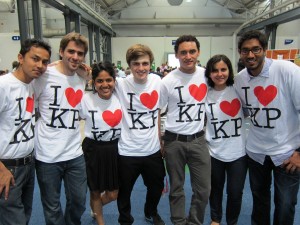 The Youth delegations joined together at COP17 to speak with a collective voice (Source: UNFCCC)

UK Youth Delegate Luke Hughes reflects on the COP17 negotiations, the agreements made in the early hours of Sunday morning and a generation’s fight for their future.

The last two weeks have been crazy. I’ve been here at the UN climate negotiations in Durban, South Africa, with 10 other delegates from the UK Youth Climate Coalition. We’ve been working with the international youth climate movement to try to get a good deal for young people; it’s our future on the line, and we were determined to remind negotiators of this.

In the early hours of Sunday morning – 36 hours late – the conference reached its dramatic conclusion. With impassioned speeches and frantic huddles, the outcomes that we’d been waiting all year for were literally hammered into reality. As I sat at the back of that plenary hall at 5 am, and the Chair rattled through the decisions, banging her gavel after each one, I reflected on my time in Durban.

The job of young people at these conferences is to inject positivity and hope into a process that is often painfully slow and dull. We’re here to outline the vision of the future we need, but when the process seems destined to obliterate that vision, it’s really hard to stay positive. So in the last few days of the conference, we found our collective voice, and the conference sat up and took notice.

On Wednesday, six young Canadians turned their backs on their environment minister while he was making his speech. For this, they were loudly applauded by delegates, but were led out of the conference and stripped of their accreditation.

The next day, my friend Abigail from the US stood up and interrupted her lead negotiator’s speech with the voice of American youth, and told those gathered that he could not speak for her or the millions of others like her who want a safe future. She too received an ovation and was escorted from the conference centre.

On Friday, my friend Anjali delivered an impassioned intervention that again received loud applause, and later, hundreds of young people sat down in protest outside the plenary hall and demanded that their voices be heard.

So were our voices heard? Well, undoubtedly, we made an impact. Richard Black from the BBC, wrote that “Outside the halls of government, it was a very good meeting for the youth. Unfailingly charming, youth delegates brought a freshness, a ‘Yes-we-can’-ness, to the often jaundiced proceedings”.

Are we pleased with the outcomes? It depends who you ask, and what their expectations for this conference were. For me (and I don’t speak for the rest of the delegation on this), it could have been a lot worse. A month ago, we were talking about the entire process unravelling here in Durban, and that didn’t happen. Instead, we saved the Kyoto Protocol, which was vital for continued international cooperation on emissions reductions. We also got a timetable for a new global deal, and the ‘Green Climate Fund’ was born, which will help get money flowing to poorer countries to help them deal with the impact of climate change.

However, the world is still very much on course for catastrophe. While we may be one year closer to that catastrophe, we’ve kept open the possibility of changing course to avoid it. The best way I can sum up my feelings right now is that we’re fighting a fight for my generation’s future. We could have completely lost that fight this weekend, but we didn’t. And for that, I’m glad.