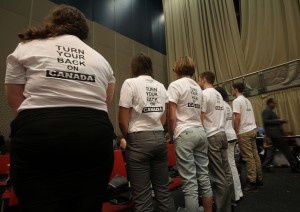 Earlier we heard from the UK Youth Delegation following COP17. From the other side of the Atlantic Emilie Novaczek from the Canadian Youth Delegation too reflects on the outcome of the Durban, and the fight, which for them has only just begun.

Despite the fact that COP17 is being touted as a success by the architects of its demise, global “leaders” in Durban did little more than lay a roadmap to devastation. They are celebrating the creation of a deal to find a deal at some point in the future while emissions rise and the planet cooks.

The Green Climate Fund is an empty piggy bank with no decision on the sources of finances. Should those nations in desperate need of adaptation financing shatter it they will find only the promises of the richest, most polluting nations. Unfortunately you can’t buy clean water, arable land and food security with promises.

While Kyoto survived in Durban, it is held hostage by polluting nations and corporate interests. The world’s major emitters, Canada among them, refused to adopt new emissions targets resulting in a zombie Kyoto Protocol which covers only 15% of global greenhouse gas emissions. This irresponsibly low ambition does nothing to solve to the climate crisis, simply delaying decisions onto time borrowed from our generation.

Nation after nation addressed the plenary, criticizing the text for abandoning the principle of common but differentiated responsibility. A representative of Grenada took the floor at one point, saying that those “living in vulnerable countries are now being asked to accept something meaningless.”

The historical climate change culprits have gotten away with murder in Durban, they have abandoned their responsibility for this crisis and placed the burden upon the shoulders of the world.

Only when the process threatens to turn into progress does Canada meaningfully engage in the climate negotiations. It’s clear that their interests are not in a binding global climate regime, only in maintaining business, and profits, as usual.

No matter the outcome of these high level negotiations, the real solutions will be created by the self empowering movements of youth that are able to take on the fossil fuel industries and the governments that support polluters and profits over the rights of people.

What we did see in Durban were youth standing up from the ‘kids table’ created for us by our governments and the United Nations. Young people from around the world rejected the adage that young people here are meant to be seen, seldom heard and never listened to. It started when six young Canadians turned their backs on their Environment Minister refusing to take the disregard for their future sitting down.