A breakthrough for politics – but not the climate 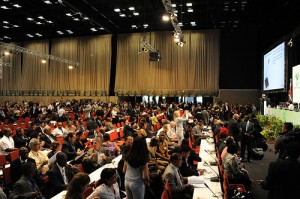 Listening to Marcin Korolec, one of the EU’s lead negotiators and Poland’s Environment Minister, listing the achievements from COP17 at Sunday’s 7am press conference, you would be forgiven for thinking the climate crisis had been averted.

Like a football manager facing his critics after a Cup Final, Korolec praised Team EU for the leadership they had shown, for the emission cuts they had pledged and for their diplomatic skills in taking the USA, China and India with them onto the ‘Durban Platform’.

The message was unequivocal. Almost triumphant. The EU had got what it came for. It had won. Sitting alongside him was the undoubted star of the final night of negotiations – the EU’s lead climate negotiator, Connie Hedegaard.

Praised as a ‘class act’ by UK Secretary of State for Energy and Climate Change Chris Huhne, she designed the EU plan to draw developing and developed countries together under a binding emissions deal.

It was this plan that was accepted – even gaining the support of the USA – whose lead negotiator Todd Stern had taken the floor in the early hours of Sunday to warn delegates ‘not to miss a major opportunity’.

China and India’s palpable fury at being strong-armed into a legally-bound future was assuaged by a change of text in the EU Roadmap, suggested by Brazil. Hedegaard wanted a reference to ‘legal instrument’ inserted. What she got after the 3am huddle was ‘An agreed outcome with legal force under the convention applicable to all parties’.

And yet as workmen in Durban start taking down the COP17 banners that read ‘Save Tomorrow – Today’, there are growing concerns that Sunday’s deal was not the panacea it was presented as.

The ‘Durban Platform’ does ensure the Kyoto Protocol will continue with EU support, albeit without Canada, who will shortly announce they are pulling out.

We do have the prospect of negotiations starting next year with the aim of constructing a globally binding deal. The mechanism must be in place by 2015, and enforceable by 2020.

And we are a step further along the road to the establishment of a $100 billion Green Climate Fund, a key element of the Cancun Agreements, although sources of funding, and where the Secretariat will be based has not been agreed.

UNEP Executive Director Achim Steiner may be correct when he says that Durban “provides a clear signal and predictability to economic planners, businesses and investors about the future of low-carbon economies”.

But it is clear that present policy does not match the science. There is deep anger and concern among the scientific and NGO communities that the Durban Platform has been greeted with such acclaim.

Last month’s IEA report clearly stated we have five years to deal with our carbon emissions before the climate spins out of control. UNEP’s ‘Bridging the Gap’ report, published just before COP17, states that emissions must peak before 2020. The Durban Platform will clearly not achieve this.

Meanwhile work on the IPCC’s 5th Assessment Report is underway, with Rajendra Pachauri highlighting to RTCC during Durban that the IPCC published a special report on extreme weather events in 2011.

One angry climate expert reprimanded me over my comment that we had seen progress at Durban, telling me: “from a climate perspective this deal is an embarrassing sham. Nothing more than an agreement to agree something by 2015.”

Greenpeace director Kumi Naidoo – who’ll you remember was escorted from the venue on Saturday in handcuffs after leading a protest inside the ICC – says a loophole within the text could allow the US to avoid any legal treaty.

And yet the alternative to this agreement appears to be even worse. At around 2am on Sunday morning it seemed the whole process of climate talks might collapse.

India had accused COP President Mashabane of undermining the principle of equity, while China delivered a furious rebuke to developed countries who had failed to meet their side of the bargain.

COP17 looked set to go down as the second annual climate conference in three years that had collapsed in acrimony. This could have been a schism from which the UNFCCC and the process could not recover.

Business needs policy certainty to flourish – a collapse of the talks would have sent the signal that the world had abandoned a low-carbon future. As former UNFCCC chief Yvo de Boer observed in a Tweet, the result was not perfect but at least it is a step along the right path: ‘More clarity needed and bumps ahead but a signal to business that the world has not abandoned action on acclimate change and sustainability’.

Instead we have an agreement of sorts – to keep on talking. As James Murray at Business Green wrote last week, 2015 could be an appropriate year for a deal to be made. The low-carbon revolution will be visible to all. Giant windfarms off the UK coast will be online. The electric car infrastructure Siemens among others is investing in will be evident around the country. Smart energy systems in everyone’s households will monitor our consumption.

A conference held in Africa highlighted the destruction climate change could cause. Perhaps a 2015 summit in the UK could showcase what opportunities a low carbon economy could bring?

So let’s not get carried away by the Durban Platform. It’s a small step, and if it is not built on then catastrophic climate change is inevitable. COP17 was a diplomatic victory in trying circumstances – particularly for the EU and South Africa Presidency. Anyone who saw the UK’s lead diplomat John Ashton at 5am slumped on a chair will realise what these events take out of individuals.

For the climate it is a small step in the right direction. A conference that started with limited ambitions has ended with limited gains – why is anyone surprised?

Ashton told RTCC before COP17 there was a danger in seeing these summits as a Cup Final. He’s right. COP was just a minute in a match that has been going on for the past 20 years. But unlike a game of football, there is no promise of extra-time and penalties. The clock is ticking down, and unless a major agreement is reached in 2015 we will all be the poorer for it.