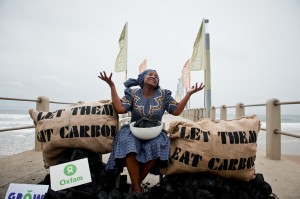 While the agreement made in Durban in the early hours of this morning was hailed as ‘truly historic’ by some, NGOs have spoken out about the deal calling it “grim news”, a “major disappointment” and a “profoundly distressing outcome.”

Celine Charveriat, Director of Campaigns and Advocacy at Oxfam said: “Negotiators have sent a clear message to the world’s hungry: ‘Let them eat carbon.’ Governments must bank the pennies won here in Durban and immediately turn their attention to raising the ambition of their emissions cuts targets and filling the Green Climate Fund.

“Unless countries ratchet up their emissions cuts urgently, we could still be in store for a ten-year timeout on the action we need to stay below two degrees. The Durban Platform can only be described as a major disappointment.”

The deal that saw countries sign up to an EU-sponsored roadmap that will see a new variant of the Kyoto Protocol – to include all countries – negotiated by 2015 and in force by 2020, was agreed in a dramatic huddle in the centre of the plenary hall.

It also saw countries agree to a second commitment period of Kyoto – not including the US, China or India – to be finalised next year at COP18.

The talks were brought back from the brink of collapse after a plea from India’s Jayanthi Natarajan who accused the EU bloc of ignoring equity in the text.

But Mohamed Adow from Christian Aid said while the outcome represents a compromise that saves the climate negotiations it endangers the lives of people living in poverty.

“It is a disastrous, profoundly distressing outcome – the worst I have ever seen from such a process,” he said. “At a time when scientists are queuing up to warn about terrifying consequences if emissions keep rising, what we have here in Durban is a betrayal of people across the world.

“By giving themselves until 2015 to agree a new deal which only takes effect in 2020 governments are delaying desperately needed action and condemning us all to dangerous warming of much more than 2 degrees.”

Many countries had originally been calling for a new legally binding agreement to be discussed early enough to have it be put into force by 2015, while others – including AOSIS – had wanted a new deal by the 2013 to replace Kyoto.

Samantha Smith from WWF US echoed Christian Aid, saying too much focus has been placed on the wording of the text.

“It is clear today that the mandates of a few political leaders have outweighed the concerns of millions, leaving people and the natural world we depend on at risk,” she said. “Catastrophe is a strong word but is not strong enough for a future with 4 degrees warming.”

“Unfortunately, governments here have spent the last two crucial final days of negotiations focused on only a handful of specific words in the negotiating texts, instead of spending their political capital on committing to more and real action to address climate change.”

There is also a consensus of where to point the finger over blame for the outcome, condemning countries such as the US, Japan, Russia and Canada who have resisted raising their level of ambition and blocking the process of negotiations.

However, Smith also has praise for some countries led by those most vulnerable nations including Small Island States and many countries in Africa who have shown a level of high ambition throughout the negotiations and going forward.

While the agreement made last night will see the Green Climate Fund realised, there are still many unanswered questions over both where the fund would be based and how it would be filled. At Copenhagen and again at Cancun, developed nations pledged $100 billion per year by 2020 for the fund.

Over the last two weeks, NGOs and vulnerable countries alike called for more detail and a clear pathway to filling the fund, with some calling for more movement over innovative sources of funding including a shipping and aviation tax or a financial transaction tax.

Yesterday some states, such as Bolivia, appeared to reject the idea the private sector and carbon markets could be a source of finance.

Harjeet Singh, ActionAid’s Climate Justice Coordinator said: “It is disgraceful that a climate summit, held in Africa delivered so little for Africans. The US should be ashamed that their actions at these negotiations effectively rendered the Green Climate Fund an empty vault.”

“How pitiful that a ‘half-days work’ for the US negotiators consisted of de-railing other countries efforts to meet their $100 billion a year promise. How many more years will poor people have to suffer for the inadequacies of rich governments to do what’s right?”

With 2012 the year which will not only bring COP18 in Qatar but also the Rio +20 Earth Summit, the NGOs are calling now for countries to raise their levels of ambition and create the kind of deal that scientists say is needed.

Oxfam offers a warning to those countries that continue to hold up the process. Charveriat said: “Those who are unable to negotiate for this kind of outcome should simply stay home.”