Greenpeace: COP17 is still waiting for its champion 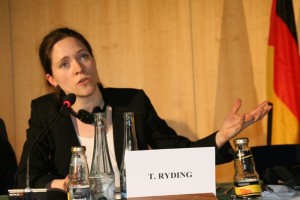 COP17 is still waiting for its “champion” says Greenpeace’s Tove Ryding urging countries to end the poker game they are playing at the conference.

Speaking at Climate Action Network International’s daily briefing she said: “In this state of play I think the thing which is really worth noticing is that this conference is still waiting for a champion. No one is being asked to do something that they cannot do.

“The first one that takes a step forward is actually going to call the bluff of all the other governments who say I can’t move before everyone else moves. The truth is that everyone could move today and there is no use in us wasting our time waiting for this poker game. It is fairly easy to make progress at this conference.”

She referred to the ministers who arrived at the conference earlier this week, to actors competing for an Oscar saying they were trying to make it appear as if they had a really hard job, when really, she said, no one is asking them to do anything that is difficult.

She also said that on the financial side all parties were being asked to do was to live up to the commitments they had already made at Copenhagen.

“There is not one minister here who has been asked to do something really hard except for all the ministers from vulnerable countries who are being asked to accept that we have yet another COP where the threats facing their countries are not addressed,” she said.

“As for questions about entering into a second commitment period of the Kyoto Protocol, let’s be absolutely clear. We are talking about an agreement that these countries have already signed and most of them have actually ratified and implemented, it’s already legislation. This is not difficult.”

Finally she said that this choice being put forward by many parties that there must be a choice between harsher targets and a legally binding agreement was an “illusion” and asked why after so many years of negotiations would countries want any agreement other than a legal one.

She said: “Basically they are giving us the choice either I will make you a lot of promises or I’ll keep them. They should make us promises they are going to keep and those actions should include action on climate change which is actually proportionate of what the science tells us is necessary.”