COP17 YOUNGO mock trial reminds delegates why they are here 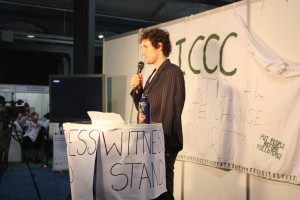 YOUNGO staged a mock climate trial as a reminder to delegates of why they are here in Durban; to deliver climate justice.

The mock trial saw statements from the ‘villains’ BPP (Big Polluters and Petroleum) and the UmmBrella Group and from those people attending the conference as front-line witnesses of climate change, relating their own experiences to the jury.

“It is very hard to attribute the guilt when it comes to climate change but we wanted to create an example of how it may operate in the future.”

The trial was a mixture of the comical – with the delegates acting out the roles of the climate villains – to the moving as youth advocates shared their own experiences. The trail was joined by Simon Matafai from Samoa in the Pacific and South African youth leader Sally Makofane. 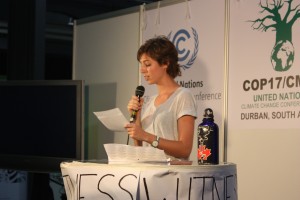 BPP defend their position at the mock trial

Fatima Ibrahim from YOUNGO and part of the UK’s Youth Climate Coalition said they were here to remind politicians and delegates of their responsibility.

“As we enter the last three days of this conference we are constantly seeing people disheartened and we are trying to bring the stories from the outside, the reason why we are here is to deliver climate justice,” she said. “People are affected by climate related disaster every single day and human rights are infringed upon. So we want to inspire people by bringing them these stories and reminding them why they are here.

“These next three days are going to be the most difficult three days of the conference and if we remind people of why they are here hopefully it will push them to do better.”

And in the end the result from the jury was obvious; climate justice now. 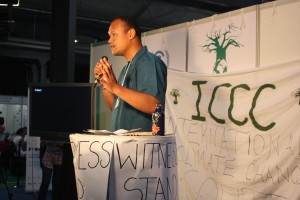 Matafai who shared his experiences of climate change with the group spoke of this message to the delegates thrashing out a deal over the coming days.

“I think if leaders were more empathetic and if the tables turned surely they would understand where they are coming from. I just want to remind the leaders that they too are human and they too would bleed if I was to prick them and they too would laugh if I was to tickle them and I think they just need to realise that they too are human and it is not about them it is about the bigger picture.”

Watch clips from the mock trial webcast below: